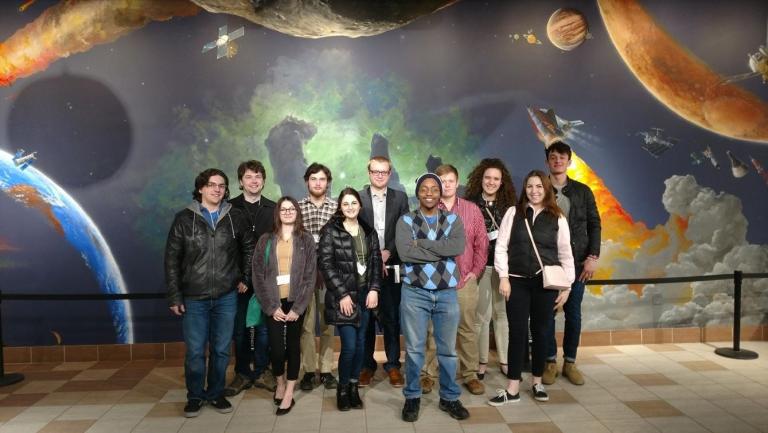 “This was a great way to connect with other members of the Physics community.”

On April 1, 2017 Kettering University had the pleasure of hosting the 2017 SPS Zone 7 Meeting. Students from Kettering University, University of Michigan-Flint, Eastern Michigan University, and John Carroll University were in attendance at this meeting. These students participated in a day full of exciting events and networking where they were able to have fun while collaborating with other Physics students in the region.

The day started with registration and brunch where the attendees were able to meet the students from other universities. Following brunch was a networking session where the students collaborated and analyzed what it is like to be a Physics student. They got into groups of four and made a list of problems that Physics students typically encounter in their undergraduate experience. These topics ranged from the Physics GRE to a lack of diversity in the field.

They were able to compare issues and concerns that paralleled between universities and most importantly, come up with solutions to these issues. This was a great way to connect with other members of the Physics community. In order to solve significant problems in the field of Physics, SPS members need to work together to solve these underlying issues to help them succeed in what they love.

Next, the meeting attendees attended a “Careers in Physics” panel session with Dr. Gillian Ryan and Nathaniel Mosher. Ryan is an assistant professor of Physics at Kettering who also enjoys mentoring undergraduate research students. Mosher, a Kettering graduate, is a noise, vibration, and harshness (NVH) Engineer at Akebono Brake Corporation. Ryan was able to give us the perspective of an academic career path of a physicist, and Mosher gave us the perspective of a Physics major who participated in research during his undergraduate education but decided to pursue a career in the automotive industry. The students were very engaged and intrigued with the backgrounds of these two physicists. It was a successful panel session where the students were given many pieces of helpful advice for the future.

The attendees of the meeting then made their way to the Longway Planetarium in Flint to watch a planetarium show called “STARS”. With a 52.5 foot dome, this planetarium is the largest in Michigan. The SPS members learned about the beautiful but destructive powers of stars in the universe. It was a great way to explore the city of Flint and learn more about the universe around us.

The SPS Advisor at Kettering, Dr. Ronald Kumon, led the students into the different Physics labs on campus. They began in the newest research lab where Dr. Ronald Tackett explained and demonstrated the functions of the new high-resolution transmission electron microscope (TEM).  The students were then introduced to the Optics and Photonics lab by Dr. Cornel Rablau.  Finally, they toured through the Acoustics Lab and saw some demonstrations there courtesy of Kumon.

The day’s activities ended with dinner followed with a plenary talk by Kumon. The title of his talk was “In Search of Targeted Cancer Treatment: Magnetic Fluid Hyperthermia and Ultrasound-Mediated Therapies.” His research focused on methods of destroying cancer cells with the use of magnetic nanoparticles. The students were intrigued by the possibilities resulting from the application of Physics in the medical field.

“The zone meeting was an excellent opportunity for students from the region to come together to network and learn more about physics in an informal environment,” Kumon said.

The 2017 SPS Zone 7 Meeting at Kettering was an activity-packed day full of fun and networking. With the panel session and plenary talk, the students were able to gain knowledge about recent research in the field and have a better understanding of the possible career paths for a Physics graduate. Each attendee gained a stronger sense of belonging within SPS and better understanding of the national programs and opportunities SPS has to offer. With this, these SPS members can share this knowledge and sense of belonging back to their chapters at their universities. This meeting was a great success, and we hope that this enthusiasm carries over to next year's Zone 7 Meeting!