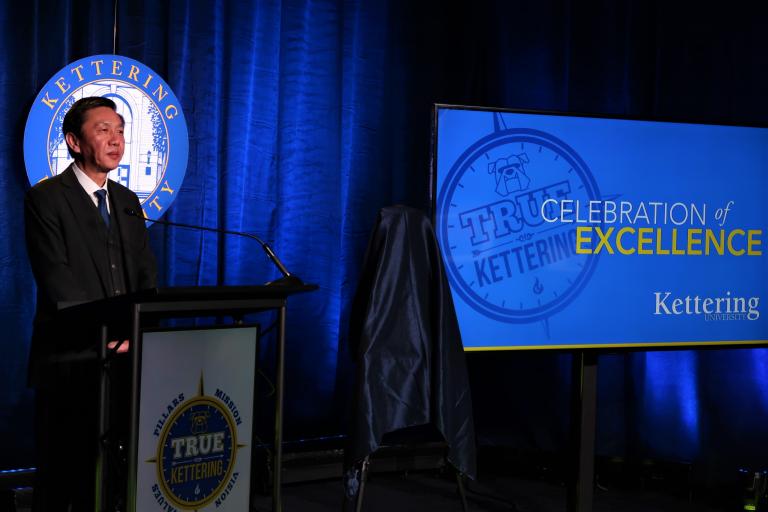 Sam Klaskow, Director of the Academic Success Center and a Bulldog Award recipient

On Thursday, Jan. 21, Kettering University had its first-ever virtual annual Celebration of Excellence event recognizing the outstanding achievements of faculty and staff during the past year.

“This past year has been unlike any we have experienced or even imagined,” Dr. McMahan said. “But, as we have proven time and time again throughout our now more than 100-year history, we as a University and community will not just adapt. We will come together and thrive. And that is in large part because of you — the faculty and staff of Kettering University.”

Service, teaching, research and fellowship awards were given out, in addition to the coveted True Kettering Staff Awards and the Bulldog Award.

This year’s True Kettering winners are:

The University’s highest honor, the Bulldog Award, is selected by President McMahan and is traditionally given to a staff member who brings excellence to their work, goes beyond what is asked of them, volunteers their time and talents and takes on extra projects to ensure the University achieves its goals.

The extraordinary circumstances of 2020 resulted in a first this year as three employees were recognized for outstanding efforts that went above and beyond to ensure the campus and its students were physically safe and academically as well as emotionally supported.

This year’s Bulldog Award recipients are:

Short has been at the University since 2002. He started as an HVAC Technician and was promoted in 2013 to Maintenance Team Leader and again in 2020 to his current role.

“He is considered a pillar within the Physical Plant team and often the go-to person for much of the campus community when assistance is needed,” Dr. McMahan said as part of the announcement.

“It’s nice knowing that my co-workers believe in me as a leader and think so highly of me,” he said.

The Academic Success Center, led by Klaskow, was called “the most helpful” in student surveys. ASC also has launched multiple successful programs and support tools including the Student Orientation And Registration program, TutorMe and Alternative Thesis.

“Under [Klaskow’s] leadership, ASC has done an outstanding job that has touched the students, faculty and many other divisions at Kettering University,” Dr. McMahan said.

Klaskow said it was special to be recognized when she loves what she does.

“I love that Kettering feels like a family,” she said. “So many of my colleagues have become dear friends to me who I trust and know I can lean on. This has been unlike any other job I have had, and I feel lucky to work for a place that allows me to build relationships with my colleagues from all over campus. Especially the members of my team in the ASC. They make my job so much fun. In addition, I also have to say our students, of course. I have met so many brilliant students who are going to go on to do amazing things with their careers. It is exciting to be a part of the journey for the young movers and shakers of the world!”

COVID-19 has challenged everyone, but third Bulldog Award winner Reed was recognized as being instrumental in contact tracing and ensuring the campus community members are safe and tested for COVID-19.

“I believe her work has allowed us to have fewer numbers of infected students, thereby keeping the entire community safer at Kettering,” Dr. McMahan said. “Throughout these last eight months, Cristina has retained her grace and composure as well as kept to the principles all good counselors believe are important to serve individuals: Compassion, collaboration, sensitivity to differences, respect for autonomy, expertise and confidentiality.”

Reed said she initially didn’t hear the comments about her because she was congratulating colleagues on their awards. It wasn’t until she heard her co-workers screaming with excitement that she realized what was happening.

“I have been in the field of education for a long time because I believe in our young people,” she said. “Students have always inspired me to be better and push for higher limits of success, on both of our parts. I thrive in the possibilities of success, despite challenges, including a pandemic.”

Faculty and staff also were recognized for their years of service with the University, including Douglas Streeter, a laboratory technician, who was honored for his 40 years of employment.

This year, the Center for Excellence in Teaching and Learning received 39 nominations for 19 faculty nominees. The following faculty members were recognized:

“The broad range of activity all contributes to the success of our many industry and government partnerships, advances learning in the classroom and with our students, and — most importantly — helps create a better world for all of us,” Dr. Zhang said before presenting the research awards.

The following faculty members were recognized with research awards:

Distinguished Researcher Award: Dr. Boyan Dimitrov, Professor of Mathematics, for his work in the area of “Applied Probability and Statistics.” This was the fourth award for Dimitrov, which means a plaque featuring his photo will be added to the faculty honor wall in the Great Court of the Campus Center.

Named after former General Motors Institute President Dr. Harold P. “Dusty” Rodes, the Rodes Professorship is selected by the Research Council Steering Committee and recognizes a faculty member for distinguished attributes such as knowledge, diligence, innovation, leadership and respect in the larger community.

This year’s Rodes Professorship recipient is Dr. K. Joel Berry, Professor of Mechanical Engineering, for his proposal, “Development of a Computational Framework for 3D Self-Field MPD Thruster Research and Design.”

Dr. Berry, who started his work more than 30 years ago, said he was pleased and thankful to be honored for his work.  The project is designed to develop a better understanding of core NASA propulsion technology.

“When Physics students study magnetics and electricity, they learn of a phenomenon that when an electric current passes through, say, a metal conductor, a magnetic field is ‘induced’ or created. The definition of a ‘plasma’ is a superheated ionized gas that results in supercharged particles with high values of electrical conductivity,” Dr. Berry said.  “When exposed to an external applied electric field, just like the physics students observe, the conductivity of the gas will induce a magnetic field that produces magnetic thrust to move the spacecraft with no moving parts and with no combustion. The technology is being used on small satellites in earth orbit and is being studied for many large-scale space missions.”

“You’re the reason behind our many continuing successes,” he said. “What you do is appreciated — every day.”