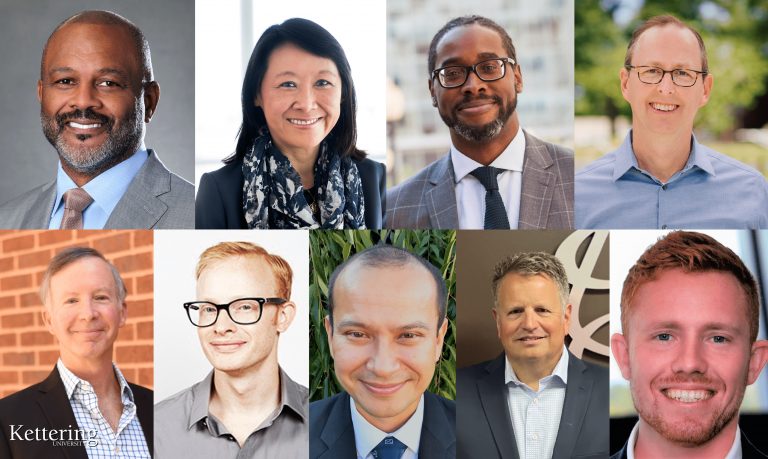 “The annual event showcases the achievements of alumni and the power of the Kettering education, as well as the opportunity to recognize the impact that donors have in the lives of our students and ensuring a bright future for the University.”

Kettering University will once again honor its generous donors and decorated alumni who are innovators and leaders in global business and industries with a virtual event, An Evening of Distinction & Determination at 7 p.m., Oct. 21.

“It is an honor to celebrate Kettering University’s outstanding alumni and donors during the Evening of Distinction & Determination,” said Susan Davies, Vice President of University Advancement and External Relations. “The annual event showcases the achievements of alumni and the power of the Kettering education, as well as the opportunity to recognize the impact that donors have in the lives of our students and ensuring a bright future for the University.”

The event will be a hybrid of live and virtual presentations from Building 22 studios in Detroit and recorded interviews with the awardees.

The following alumni will be recognized:

Johnson is a founding member of GM’s Inclusion Advisory Board, and serves on the GM PAC Board and Steering Committee. In 2021, he was named the Black Engineer of the Year, and in 2014, he received a Black Engineer of the Year Career Achievement Award and a BEYA Legacy Award. He earned a Bachelor’s degree in Industrial Administration from Kettering University and a Master’s degree in Manufacturing Operations from the Massachusetts Institute of Technology.

Carolyn Lum ’87: Lum is the Senior Vice President, Business Transformation and Head of Continuous Improvement at Philips. She has more than 30 years of experience in manufacturing operations, lean, continuous improvement, product engineering and new product introduction. She joined Philips in 2014 and brought daily management, structured problem-solving and Kaizens (a Japanese term meaning continuous improvement) into all of the company’s market and business group organizations within a year.

She started her career at General Motors as a Product and Manufacturing Engineer, Operations Manager and Lean Implementation Change Agent. Lum also worked at PerkinElmer Optoelectronics and Danaher Corporation.

Dr. Aaron Kyle ’02: Kyle is a Senior Lecturer in Biomedical Engineering (BME) Design at Columbia University where he teaches two semesters of BME lab courses, an advanced Bioinstrumentation course and BME Senior Design. In 2014, he created and launched the HYPOTHEKids (Hk) Maker Lab, a National Institute of Health-funded set of programs focused on introducing underprivileged and underrepresented, minority high school students in New York City to engineering design and biomedical research. More than 160 students have learned and applied a bio-engineering design process to date, and Kyle also is working to expand the program into the curriculum of students in grades 6-12 throughout New York City and state with the development of an engineering design-centric course for middle and high school students. The courses are now being taught in seven NYC high schools, impacting more than 1,000 students.

Tim Willis ’88: In his role as the Vice President of Global Supply, Manufacturing and Strategy at Aeva, Willis leads the formulation of supply chain strategy along with supplier selection and development, quality, manufacturing and procurement. Aeva designs and manufactures a 4D Lidar to bring the next wave of perception technology to broad applications from autonomous driving to consumer electronics, consumer health, industrial robotics and security. Willis started his career as a Product Design Engineer at Ford and moved on to Motorola, Apple, Philips Lumileds and Waymo before arriving at Aeva.

Moye earned a Bachelor’s degree in Mechanical Engineering from Kettering University and a Master’s degree in Business Administration from Harvard Business School.

Brian Falther ’11: Falther is the founder of HopTera Aviation Industries, HopMondo Space Industries and blu5tep Records. Prior to founding these companies, he co-founded Bowery Farming, an indoor agricultural startup in 2015 that is now valued at more than $2 billion. At Bowery Farming, Falther used sensors, robotics and LED lighting to automate and optimize natural processes reducing the amount of land and water needed and eliminating pesticides. Falther’s other work included program manager at American Autocoat, Chief Executive Officer and Co-Founder of Future Tech Farm, produce and process engineer at Almond Products and business engineer at Natural Abundance Suburban Micro Farm.

Falther is a member of the board of directors at EOS Detroit and a former member of the advisory board at Indoor Harvest Corp. He earned a Bachelor’s degree in Mechanical Engineering from Kettering University, and has studied Music Production at Berklee College of Music.

Dr. Henry Louie ’02: Louie is a professor in the Electrical and Computer Engineering Department at Seattle University. He is the President and Co-Founder of KiloWatts for Humanity, a non-profit organization that provides off-grid electricity access and business opportunities in sub-Saharan Africa. Louis was a Fullbright Scholar to Copperbelt University in Kitwe, Zambia in 2015-16. His textbook “Off-Grid Electrical Systems in Developing Countries” has been downloaded more than 1 million times and is used by universities around the world.

Samuel Hoff ’90: Hoff is the Founder and Chief Executive Officer of Patti Engineering. Under his leadership, the company has developed and implemented several cutting-edge control systems used in distribution and manufacturing facilities. Patti Engineering is leading operational technology charge into harnessing Industry 4.0 technologies. Hoff also is the Managing Member of SmartGuard and SmartAxess Secure Asset Control.

He is involved in many organizations including Automation Alley, Kettering University and Controls Systems Integrators Association, and is the past president of the Clarkston Rotary Club. Hoff earned a Bachelor’s degree in Electrical Engineering at Kettering University.

Cody Cochran ’16: Cochran is the Co-founder and General Manager of Azoth, a subsidiary of East West Industrial Engineering (EWIE) Group that supplies prototypes and finishes products on-demand using 3D printing. His previous roles in the company include Key Account Manager and Director of Engineering. Many of Azoth’s clients are Fortune 500 companies, including General Motors, which made an Azoth product the first metal 3D-printed part to be included on a production vehicle. Previously, Cochran worked as a program manager at Production Services Management Inc.

He earned a Bachelor’s degree in Mechanical Engineering from Kettering University.