“What Kettering teaches you is beyond the books. Knowledge itself isn’t powerful. Knowledge is powerful when you know how to use it.”

Clinton Bolinger ‘06 has always had a competitive spirit and engineering mindset. From his early days of constructing reclining cardboard chairs and giant functioning versions of Mousetrap, to his current position as a robotics mentor and entrepreneur - invention, design and iteration have been the cornerstones of his ambitions.

It was these attributes that lead Bolinger to Kettering, and allowed him to become who he is today. Bolinger is from the Flint area and his father, David Bolinger ‘74, went to Kettering, so it was a familiar place and a great fit.

“The co-op experience was an added bonus. I was able to work and go to school - back and forth. In high school, you go to school all the time but when you get in the real world you have to work all the time. Kettering is a good transition to do both,” he said.

Bolinger’s robotics experience began in his senior year of high school, when his physics teacher invited him to join the school’s FIRST Robotics team, and he was hooked from there.

“Even before high school I loved design competition.” Bolinger said. “I always had some interest in designing and building things, so Kettering made sense for me.” 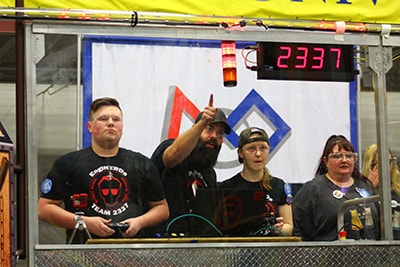 Now life for Bolinger revolves around robotics. He builds robots, sells robot parts and teaches high school students the importance of engineering methods, manufacturing, and leadership as the founder and co-head mentor of the Grand Blanc EngiNERDs - Team 2337.

One of Bolinger’s favorite things about robotics is getting to share his passion with the younger generation.

“It’s great to give back to students and younger people who might not know what they want to do after high school. On top of teaching them about robotics, I help them with their grades and guide them when applying to college,” Bolinger said. “Being able to work with students and see them grow and see them go through the mental development of what they want to do with their life is exciting.”

Robotics also teaches students about deliverable deadlines, as teams are only given six weeks to complete design, prototyping, manufacturing, assembly, programming, testing and iteration, with limited resources. It was this immediate need for materials that lead Bolinger to establish The Robot Space in 2013, while also working for Cypress Integrated Solutions, based in Lapeer, Michigan.

“With The Robot Space, I know the industry and I know what people want and what people need. Really, we look at ourselves as a service provider. Our motto is ‘Save time. Save money. Build robots.’ We want to save people time and money so they can get back to what they want to do - build really cool robots to do really cool things,” Bolinger said. 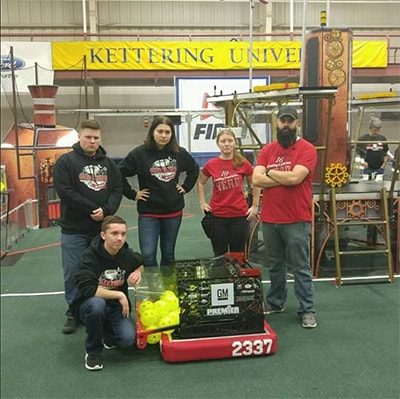 At The Robot Space, Bolinger, alongside wife Brandi, hosts summer camps and workshops for younger children to learn how to build robots. It’s the ability to pass on the knowledge that he learned at Kettering and throughout his career that Clinton appreciates the most, and it’s a big part of why he chooses to mentor The EngiNERDs year after year. His passion was fueled at Kettering and he now gets to share that with others.

“Robotics is the hardest fun you’ll ever have. You get to build a robot in six weeks. Things go wrong on competition day, but at the same time, it’s so rewarding at the end,” Bolinger said. “I love high stress situations. I love very fast strategic situations. You have to quickly think and do something. Our team always tries to push ourselves.”

“Being able to take a loss or a failure and learn something from it and then turn that into positive is something we try to teach the team. We want to build leaders and to change the world in a positive way,” Bolinger said.

“What Kettering teaches you is beyond the books. Knowledge itself isn’t powerful. Knowledge is powerful when you know how to use it,” he said.

“There’s a lot of time when people come out of other colleges and they don’t understand how things work in the real world, but Kettering taught me that. And now I use robotics to teach high school students this, and hopefully show them that they can change the world.”