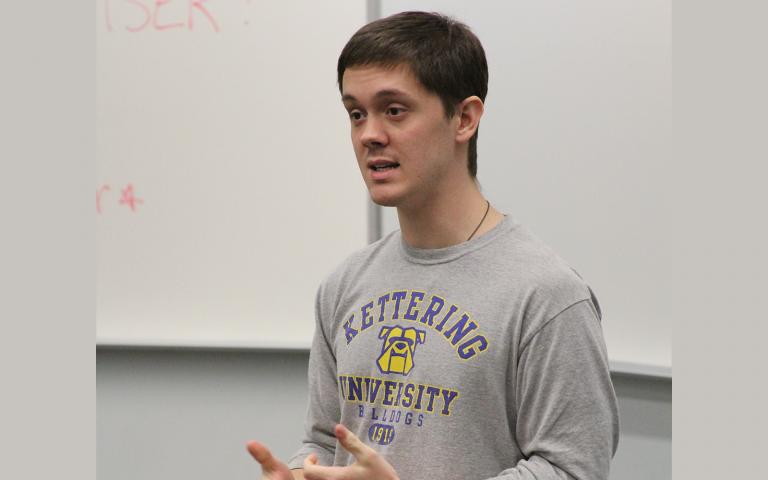 “It’s the school where they send officers to learn what their expectations are and steps we can take to fulfill those expectations.”

In search of cutting edge technology and personal leadership opportunities, Justin Maurina ‘14 is taking an unconventional path towards his pursuits - he’s joining the Navy.

“Are you crazy? That was my first thought,” said Maurina’s mother, Pam Ruhstorfer. “I’m very  proud of him but very nervous about it as well.”

“It’s the school where they send officers to learn what their expectations are and steps we can take to fulfill those expectations,” Maurina said.

The next step is to take a sea tour on a ship, typically a Cruiser or Destroyer, to qualify as a Surface Warfare Officer. This is followed by two different types of trainings – Power School and Prototype. Power School teaches the theoretical and academic knowledge necessary to succeed in the Navy while Prototype provides practical knowledge on how to work with nuclear reactors that are the primary source of energy on Navy carriers.

“The Power and Prototype schools complement the Kettering educational model that incorporates co-op and classroom learning,” Maurina said. “After that, my particular track will take me to a Carrier where I will be responsible for operating and maintaining one of the nuclear reactors.”

Maurina, an Industrial Engineering major, came to Kettering from Kearsley High School in Flint after hearing about the school from his mother. His grandpa, Ed Ruhstorfer, was a former maintenance employee at Kettering which provided his mother with enough information to encourage him to enroll.

“My mother had intimate knowledge of Kettering when my grandpa worked here,” Maurina said.

Maurina’s learning style complemented Kettering’s approach to providing an engineering education. His success continued after graduation as he served as a student ambassador and spokesperson for the University by mentoring potential incoming students.

“I’m very much of a kinesthetic learner, a doer, and I liked the lab experience but primarily the co-op met my expectations,” Maurina said. “It did exactly what I wanted to do and more.”

The origins of Maurina’s military influence are not immediate. He grew up in a single-family home with just his mother and no siblings. His spectrum of influence came from his next door neighbor David Stevens who served in the army as a member of the Military Police. There was also his friend Dan Kmetz who has traveled the globe while serving in the Marines as well as his Karate Instructors, Mickey and Mary Tankersley who also served in the army.

“Kettering was a very good experience for him because he got to work in the private sector. Going into the military is going to give him a little more global experience,” Ruhstorfer said. “I see him doing something different all the time. That’s what the Navy is going to offer him, the opportunity to keep going and keep learning.”

Long-term, the ability to work on ground-breaking energy technology involving nuclear reactors was also an inspiration for Maurina.

“One thing that I’ve been interested in is alternative energy sources,”  Maurina said. “Nuclear energy may not be renewable but it’s a viable source of power.”

Despite the initial shock, Ruhstorfer is supportive of her son’s decision and believes that he will thrive in the structured learning environment that the Navy will provide. She is certain that the fast-paced adventurous lifestyle that the Navy promises will complement her son’s ambitions. She’s also prayed about it and the divine response has always pointed towards the Navy.

“We put it in God’s hands but I don’t always agree with God,” said Ruhstorfer, laughing.