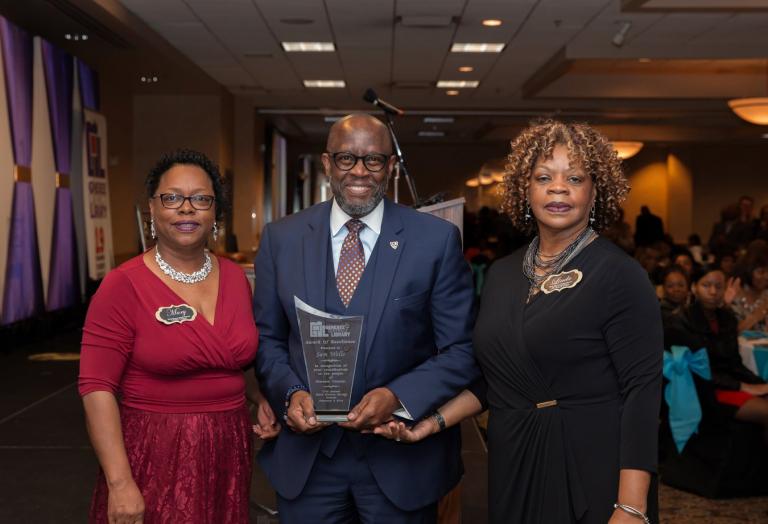 Throughout his career, Sam Wells ‘78 has made giving back and making a difference in young people’s lives a top priority. Just as he was guided and mentored throughout his life and education, he knows doing the same for others will make a better future.

Wells, born and raised in Flint, Michigan, was recently named the 2017 Mentor of the Year by the Michigan Community Service Commission. He is a founder of Alpha Esquires, a local youth group and mentoring program aimed at promoting academics, brotherhood and community service. He serves as the director and has been mentoring young men in the community for decades.

“It’s really intended to uplift mankind. It’s about making a difference in the lives of the young men I mentor,” Wells said. “I was humbled and honored to receive the award. Awards are nice. You can put a trophy on a mantle, but the real reward is the lives I get to affect.”

As Senior Global Director of Sales for Inteva Products LLC, Wells is out on the front lines building relationships with customers, figuring out what they need, what their marketing goal and other key imperatives are and helping them meet those goals. Wells helps Inteva Products, an automotive supplier, drive the right product strategy to meet the customer’s expectations.

Before landing at Inteva Products, Wells worked for General Motors and Delphi for more than 30 years. Outside of his career, Wells also has been a part of Big Brothers Big Sisters and Urban League of Flint, and he served on the Board of Directors for both organizations.

Caring for people and helping wherever needed was ingrained in Wells at a young age. When he attended Kettering University, General Motors Institute at the time, his parents would tell him to bring students home for dinner on the weekends.

“While I was at GMI, I watched how my parents supported other young people while they were in school. They asked me to bring students home for dinner on the weekends,” Wells said. “A weekend didn't go by when someone didn’t come by my home for dinner. Showing that care for others became a part of who I am.”

During high school, Wells did a co-op at an AC Spark Plug facility where he met co-op students from Kettering and they talked to him about the University. Wells’ father, who was an hourly worker at a GM plant, also encouraged him to attend. Being one of seven children, having the opportunity to work while in school was a huge help to his family.

“Taking in all those factors I thought it was the right avenue for me, no question about it. The rigor and discipline of GMI or Kettering definitely sets your mind and positions you to do well,” Wells said. “You learn so much more about industry and how things work and you are doing it at the age of 17,18 and 19. You are managing and handling deadlines. There is a different mental discussion in the workplace that really pays off in the long run. You also learned the importance of networking.” 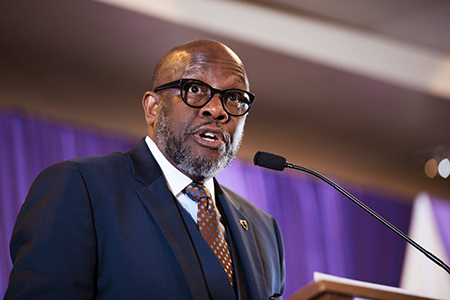 Wells also was a founding member of the Black Unity Congress on campus to allow more networking and bond between the African American students on campus. Earlier this year, Wells attended the first Kettering University/GMI African American Alumni Networking Reception at Factory One in Flint.

Creating relationships, networking and creating bonds to help others succeed is part of who Wells is. That’s a big reason why mentoring has such a special place in his heart.

“It was really a desire to make a difference. I had parents who were strong believers in education. Neither of my parents finished high school but for all of my siblings who was a mandate. Finish high school, go to college and do things differently,” Wells said. “Somebody else paved a way for me. You don’t progress as an individual, you don’t progress as a community, if everyone takes the approach ‘I’ve got mine. You figure out how to get yours.’”

Wells favorite part of mentoring is when he sees a light bulb go off for the first time.

“When you have a young guy and he finally realizes ‘I can do something different. I am capable. I am not defined by my environment,’ that is a good feeling. One of my favorite moments is when these young guys start applying to go to school and start bringing in their acceptance letters,” Wells said. “There’s nothing like it. That’s the reward for me. When a young person comes in and says ‘I met my goal with your help.’”

Wells encourages Kettering students to continue to volunteer after they graduate.

“You are part of something bigger in this community called the world. We can all sit back and complain about what’s wrong. If we all did that nothing changes,” he said. “It’s important to be involved to make a difference. Don’t wait on someone else to get things done. When people mobilize, they make a difference.”

Wells also encourages students to understand the importance of building strong relationships because they are crucial for personal, business and community life.

Wells’ roommate while at school was from New Jersey, and they are still best friends today. And there’s a group of friends and their spouses from Kettering who still get together once a month.

“That led to the recent African American Alumni Networking Reception at Factory One. That leads to more networking in the future. That’s critical for young students to learn,” Wells said. “Build the relationships on sincerity, shared opinions and principles.”