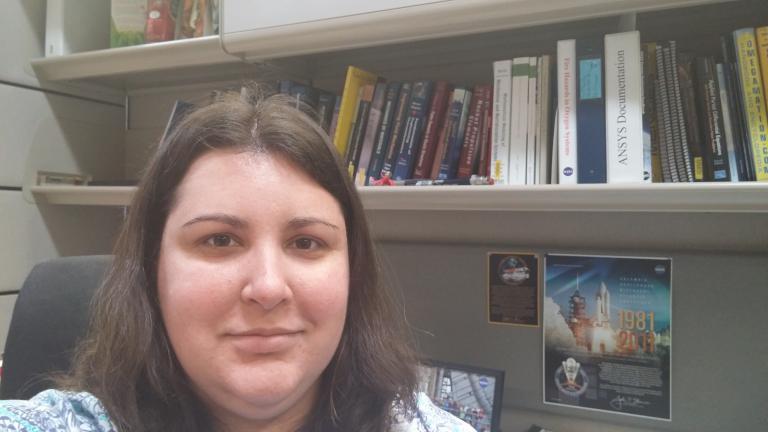 “When you’re out here watching a test your chest vibrates, your clothes vibrate a little bit. You really get a sense for the size of the things you are working with.”

Rebecca Junell ‘07 learned to always ask questions, search for answers and keep reading. From an early age those seemingly simple things lead her to pursue a career in engineering.

That background in engineering has led her to NASA, where she works as a mechanical/test engineer at the John C. Stennis Space Center in Mississippi.

Junell was encouraged at a young age to follow her interest in the sciences. When she had questions her father would help her find the answers, something that’s stuck with her throughout her life.“NASA is somewhere I plan to stay for a while. Here I have the opportunity to use my degree, to be useful, to really have a good career and keep growing” said Junell. “This is a position where I’ve been able to draw on a majority of the concepts I’ve learned at Kettering. There is always an opportunity to stretch into something new.”

In the area that Junell works in at the Stennis Space Center there are roughly three women compared to 25 men, which is a statistic Junell is used to in the STEM (science, technology, engineering, mathematics) world. Her advice to young girls interested in STEM is simple: “Don’t be afraid to ask questions. If you’re interested in something, go ahead and ask a teacher, ask a mentor. Read. Research.”

She suggests that if you see a young girl or young student in general showing an interest in STEM to find a way to communicate with them at their level. If you can find an everyday concept to relate the STEM topic to them, you’ll often see that spark of interest and kindle it.

Junell was drawn to engineering because she likes solving problems and answering questions.

“I like being able to visualize how things work, being able to get that picture in your head of how you can manipulate ideas and put them together,” she said. “It’s nice to know that something works, but it’s even more important to understand the basic ideas of how the problem behaves. It’s kind of like the satisfaction of assembling puzzle pieces.”

She is happy she chose an engineering career and chose to pursue it by studying at Kettering. At NASA, she has had the opportunity to help test rocket engines before they launch. Whether from outside or inside her office, a rocket engine going off is always memorable.

“When you’re out here watching a test your chest vibrates, your clothes vibrate a little bit. You really get a sense for the size of the things you are working with. If I can’t get out to see a test I can put my hand against a door and feel it,” Junell said. “It’s really easy to get passionate about it.”

The team Junell works with makes sure the test stand and its parts can withstand the extreme heat and extreme cold of a rocket engine test. She analyzes and reviews data as the pipes, instrumentation, and structures are exposed to different environments. Junell has been working with and testing the RS-25, also known as the Space Shuttle Main Engine, to get it ready to be reused for NASA’s next vehicle.

The engine is 168 feet long, 96 feet in diameter and weighs 7,775 pounds. When it’s being tested the team needs to keep it stationary for the duration of a rocket launch, sometimes nearly 10 minutes. Even though they aren’t actually launching the rocket, there is adrenaline and excitement that goes into the process, Junell said.

“If there is anything that is going to go wrong we want to find out here,” Junell said. “This is where NASA’s rocket engines are vetted before they are considered safe for use by people or cargo.”

Junell was a transfer student to Kettering, first studying physics at a community college in Florida. But she was looking for more applications of physics. That’s what led her to study Mechanical Engineering at Kettering.

There are lessons she learned as a Kettering student that she will take with her everywhere. The co-op experience taught her to work together as a team and learn how to collaborate with others. Her advice for Kettering students is to always keep their books, rather than returning them. They are a resource they will use throughout their careers, she said.

But most importantly she learned the best way to get information.

“How to find and use resources, that’s probably one of the biggest things from the classes and co-op experiences that I definitely use now,” Junell said. “Whether they are from your textbooks, company resources, or the Internet, there are likely answers out there for you to find. Spend the time exploring what resources are available to you and your effectiveness will increase accordingly.”