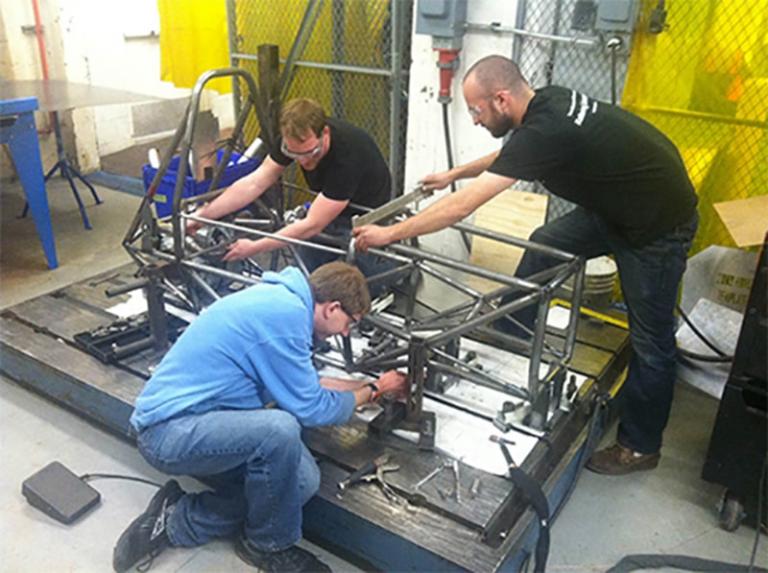 “We are preparing the vehicle for a turbocharger integrated with a single cylinder motor.”

The Society of Automotive Engineers Formula (FSAE) season is more than halfway over as Kettering University’s team entered its crucial building phase at the turn of the new year.

“It’s as simple as it sounds, we need to build a car,” said Thomas Vendittelli, program manager for the Kettering University Formula team.

The Formula season is broken down into four quarters from July to June each year. During the first three months, the team enters a design phase to improve upon last year’s model. The team then transitions to a preparation and material gathering phase to outfit the design.

“In order to build a race car, you need materials and parts,” Vendittelli said. “Many parts we build ourselves and then we purchase others when we are required to do so.”

Design and preparation phases lead to the actual construction of the race car which started during the first week of January. The final phase of the process is two events where they competitively test their vehicle throughout a series of static and dynamic events which take place over a period of four days. One event is at the Michigan International Speedway from May 13-16 and another at the Lincoln, Nebraska Airport from June 16-20.

Last year, the team did not place in the Michigan competition due to technical difficulties with the powertrain but finished 10th overall in the competition in Lincoln, including first place in fuel efficiency and second in cost. This year, they are looking to improve upon both of those finishes.

While constructing a race car, the prevailing philosophy of the Kettering team is to “gain the most value from every dollar spent on the vehicle,” meaning, they weigh in cost while considering their options for parts and materials during the design process. Based on this philosophy, for the past two years, they have been granted the “Pay for Performance” award which is awarded to the team that can obtain the most dynamic points per dollar spent at competition. They are striving to achieve success using this same approach to construct this year’s vehicle.

“We are running a new design,” Vendittelli said. “We are preparing the vehicle for a turbocharger integrated with a single cylinder motor.”

Last year, the team also transitioned from 13-inch to 10-inch wheels, a switch that provided the team with a lightweight design.

“We’ve revamped some of the problems we had last year,” Vendittelli said. “Systematically, the vehicle is improved from last year but the biggest challenge that we face is the turbo charging of the single cylinder motor."

The formula vehicle is being designed to excel in two days of dynamic events that evaluate the vehicle’s acceleration, stability, vehicle dynamics, fuel efficiency and endurance. Prior to testing the vehicle, the SAE team will also showcase their vehicle to sponsors and automakers in attendance in a real-world business presentation.

“Our reporting and budget has to match the actual constructed vehicle,” Vendittelli said.

Vendittelli, a Mechanical Engineering major, serves as the program manager for the organization but also plays an engineering role alongside chief engineer Adam Watson. Vendittelli transferred from the University of Michigan-Flint where he was a joint business/engineering double-major because he wanted to focus more on engineering. Now, as a leader of FSAE, he’s getting invaluable business experience through the Formula season.

“The business team is like running a small business,” Vendittelli said. “Since all the  students on the team are engineers, each one of us have our own spot on the car and we still take time to do the business side of things.”