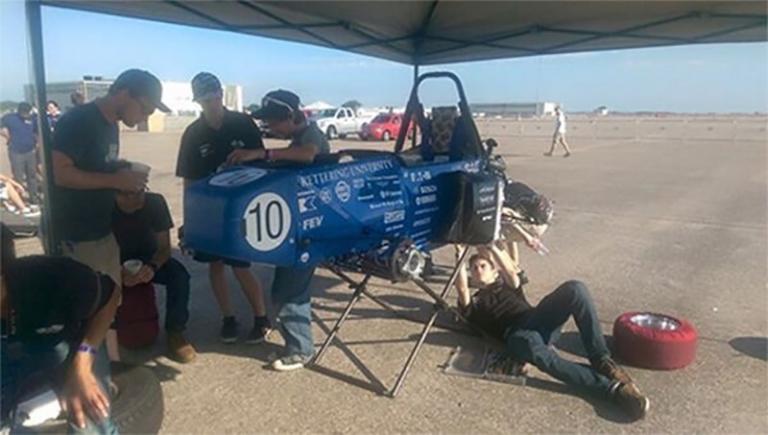 “With two years of experience on the current platform, we have huge goals and aspirations for 2016.”

Despite a disappointing end to the competition, the Kettering University Formula SAE team finished 26th in the Lincoln Airpark competition in Lincoln, Nebraska, June 17-20.

The team had scored 463 out of a possible 600 points heading into the endurance test but didn't complete the 22 kilometers evaluation resulting in a total score of 465.5 out of 1,000. The first-place team, San Jose State University finished with 891.2 points.

“At the end of the day, with only the endurance test remaining, we were sitting in a very good position,” said Thomas Vendittelli, Project Manager for the Kettering University Formula team. “We knew that a strong finish in endurance was sure to put us in the winners circle.”

Unfortunately, the formula car was unable to complete the endurance test.

“After we went on the track the vehicle made two laps and then a suspension push rod pulled through a gusset on the front left side of the vehicle, dropping the vehicle to the pavement which removed us from the race,” Vendittelli said. “It was heartbreaking and emotional to see such a great car fail so abruptly.”

The team finished 1st in the cost category which overlays the performance of the vehicle with the resources available to construct it. Historically, the Kettering team has always excelled in this category. The team also finished 28th in business presentation, 10th in design and 12th in autocross.

The team finished 26th and 16th respectively in the two signature competitions in 2015. For next year, the team is focused on dropping weight and analyzing the suspension structure of the vehicle.

“With two years of experience on the current platform, we have huge goals and aspirations for 2016,” Vendittelli said.