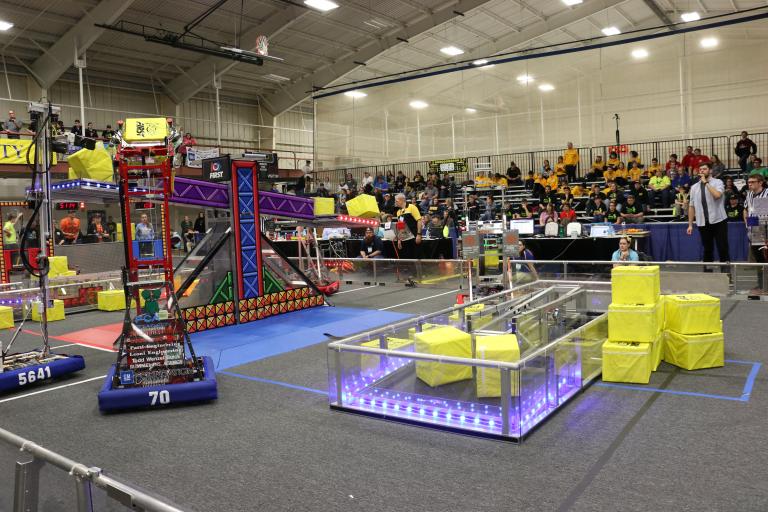 For the 10th year in a row, Kettering University will host hundreds of high school robotics students during the 2019 FIRST Robotics districts competitions.

During two weekends in March, hundreds of future inventors, engineers, scientists, entrepreneurs, and technology leaders will be on Kettering’s campus for this year’s Destination: Deep Space event.

This is the fourth consecutive year Kettering is hosting back-to-back FIRST Robotics districts on its campus, bringing more than 80 Mid-Michigan teams to Flint. The first competition is March 1-2 and the second is March 8-9.

“The FIRST district competitions are always such an exciting time to be on campus,” said Bob Nichols, Director of Kettering’s FIRST Robotics Community Center. “FIRST Robotics combines the excitement of sports with the rigors of science and technology. A FIRST Robotics competition is a STEM rock concert with all the music and dancing between competitions. You have to see it for yourself."

The FIRST Robotics competitions are open to the public and are hosted in Kettering’s Recreation Center. The opening ceremonies are 10:30 a.m. on the two Fridays and 9 a.m. at the Saturday events. Award ceremonies for both weekend are planned for 5 p.m. March 2 and March 9.

For the third consecutive year, the Ford Motor Company has sponsored both competitions.

Craig Stephens, Director of Controls and Automated Systems at Ford, said the partnership with FIRST and Kettering is the perfect match with Ford.

“The FIRST Robotics competitions have much in common with real-world engineering – tough problems requiring creative solutions to meet tight deadlines, along with strategic planning, organization and teamwork,” Stephens said. “The values of FIRST, including cooperation and graceful professionalism, align with our own core values at Ford, and we see FIRST as a great way to invest in our future, even as our industry faces an unprecedented demand for engineers.

“We have a lot of Kettering graduates at Ford and it is great to see a strong local engineering school being as committed as we are to FIRST; we are very happy to be able to lend our support to sponsor these events.”

Ford supports approximately 90 FIRST Robotic Competition teams this and provides a Ford mentor for every team. This year Ford also wanted to get even more involved in the competitions and partnered with FIRST to sponsor the new Autonomous Award.

“It is our hope that this new award will get the teams more excited to make their robots more intelligent and we are delighted to be able to recognize those teams that were leading the way in putting intelligence and autonomy into their robots,” Stephens said.

Kettering University is a longtime supporter of FIRST Robotics. This is the 20th year Kettering has hosted a FIRST competition on its campus, and the 10th year the University has hosted at least one districts. The University became the first site in the country to host back-to-back district tournaments in 2016, and has continued that tradition since. Kettering was also one of the first universities in the country to award FIRST Robotics scholarships, providing more than $5.3 million in scholarships to FIRST participants since 1999.

The FIRST Robotics Community Center at Kettering University is the only facility of its kind on a college campus in the country. It provides residential space for eight high school teams, hosts visiting teams throughout the year and hosts a range of summer camps that attract participants from all over the U.S. The facility gives students access to state-of-the-art equipment and mentors and provides them with an immersive experience on the campus of one of the country’s top STEM and Business universities.

“We look forward to having the future of the science, mobility, and technology industry on our campus the first two weekends in March. We know FIRST prepares youths for a successful career in STEM. And there’s no better place than Kettering to host these FIRST teams,” Nichols said. “While on campus the more than 80 FIRST teams will have the opportunity to learn about all the ways Kettering University can help them go pro in Robotics.”