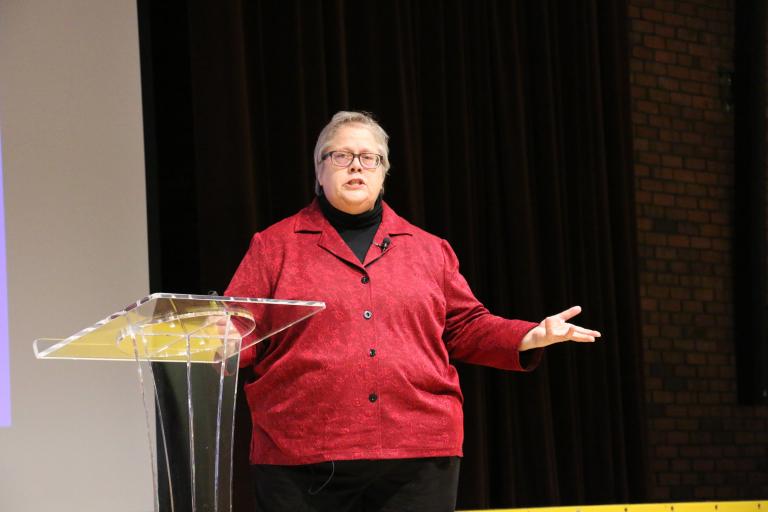 “Her vital combination of technical knowledge and community engagement expertise is currently on display in Sullivan’s latest service-geared mission -- assisting the city of Flint in creating sustainable, long-term solutions to the Flint Water crisis.”

Sullivan is a distinguished faculty member who has, throughout her career, encouraged and facilitated student service in communities of need around the world. She frequently emphasizes to students that it is vitally important for them to apply their technical knowledge and expertise to civic pursuits that improve safety, health, wellness, infrastructure and access to resources in communities globally.

Sullivan helped form and actively advises student chapters of the Student Association of Global Engineering (or SAGE – formally known as Engineers Without Borders) at Kettering. Under her mentorship SAGE students have engaged in a wide range of service projects around the world, including developing and deploying potable water solutions to communities in Mexico, South Africa and Haiti.

Student groups with whom she has worked have also engaged in service projects across Flint, including constructing playgrounds and helping make improvements to public parks.

Recently, she spearheaded a new initiative designed to teach Lakota youth on the Pine Ridge reservation in South Dakota. The reservation is the home of the Oglala Lakota Tribe and is contains some of the poorest areas in the country. Households there often consist of multiple families living in trailers without access to electricity or basic services.

Sullivan and her students are currently working with the Oglala Lakota to bring renewable sources of energy and lighting to unserved homes across their land while empowering the community broadly with the skills, technology and resources to construct and deploy without outside assistance these sources of renewable energy at extremely low cost.

Sullivan and her students often have taken on technically complex projects in communities while at the same time earning and gaining residents’ trust.

Sullivan’s technical capabilities, combined with her genuine belief in the power scientists and engineers have to transform communities around the world through community engagement and activism, have made her one of the most trusted voices on the water emergency in Flint.

Her vital combination of technical knowledge and community engagement expertise is currently on display in Sullivan’s latest service-geared mission -- assisting the city of Flint and its residents in creating sustainable, long-term solutions to the Flint Water crisis.

Sullivan first began working alongside residents on water-related issues in 2014 when she fought on behalf of residents who had lost access to municipal water. As concerns shifted from access to water quality after the city switched its source, Sullivan worked with local advocates to raise awareness of these concerns with government officials and agencies, ultimately mobilizing community members from across the city to collect the very water samples that first revealed the true nature of the lead problem faced by its residents.

Sullivan continues to use her background, along with her experience in community organizing, to serve Flint and its residents in a variety of roles, including advising Flint’s newly elected mayor, working with local physicians to coordinate members of the health community, and representing Flint on the State of Michigan’s Flint Water Interagency Communication Committee. She also actively assists the EPA Office of Research and Development in their efforts to establish test protocols within the Flint water treatment plant that have the confidence and trust of the people of the city.

Sullivan has a Ph.D. from the University of Texas at Arlington in Materials Science and Engineering, with expertise in biomaterials, polymer processing and service learning. Sullivan received Kettering University’s Outstanding Teaching award in 1998 and received the Faculty Distinguished Citizenship Award in 2010.