“When I got an offer from Kettering University, it was difficult for me to refuse because being a professor is my lifetime dream.”

Park joined Kettering in March 2017 after working on localization and mapping for autonomous vehicles at Changan U.S. Research and Development Center, a major OEM in China. Prior to that, she spent two years as a senior research engineer developing applications for vehicle camera software for Hyundai Mobis in Plymouth, Michigan.

“To be a professor is my childhood dream,” Park said. “When I got an offer from Kettering University, it was difficult for me to refuse because being a professor is my lifetime dream. I love teaching and working with young talented students.”

Park first heard about Kettering when she managed a co-op student at Hyundai. She was surprised by how quickly the student adapted to both the technical and corporate elements of working as a full-time engineer.

“This is a very unique program,” Park said. “It is good for industry because they can train and have connections with future engineers.” 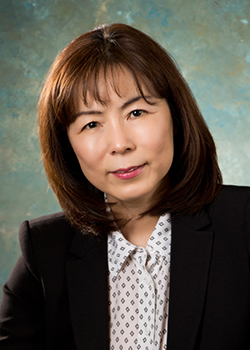 Now at Kettering herself, Park is continuing her research in environmental perception and localization and mapping for autonomous vehicles.

Environmental perception refers to the multitude of stimuli and obstacles that impact driving conditions. These elements can include snow, rain, time of day, traffic signs and signals, pedestrians and other vehicles, among others.

“Pedestrian detection is the most challenging,” Park said. “The shape of traffic signs and vehicles are similar but pedestrians are more variable. Pedestrians can be wearing a hat or holding a baby -- the autonomous detection systems needs to be able to distinguish these unique features.”

The second aspect of Park’s research focuses on localization and mapping. This technology would allow drivers to pre-map a destination into a GPS. The autonomous vehicle would then create a precise route by factoring in potential obstacles and delays and follow the mapped coordinates along the set path. A localization algorithm applied through the vehicle sensors and cameras would then adapt the GPS route in real-time to ensure the proposed trajectory matches the actual conditions.

In order to work on these two prominent areas, Park will employ two graduate and two undergraduate students at Kettering. One of the graduate students will focus on radar and camera based object detection while the other examines lane marking detection.

Additionally, Park is in the process of developing a “Computer Vision for Autonomous Driving” class for the Winter 2018 term. The class will serve as an introduction to object detection using artificial intelligence. The course will be beneficial to Kettering students participating in the AutoDrive Challenge.

Kettering is one of eight universities around the world selected to participate in the Society of Automotive Engineers’ (SAE) AutoDrive™ Challenge – an international autonomous vehicle competition. This newly established, three-year competition will task faculty and students at some of the world’s top universities with developing and demonstrating a fully operational autonomous driving passenger vehicle. The technical goal of the competition is to navigate an urban driving course in an automated driving mode by year three.

“Autonomous driving is important because it can reduce the length of trips, enhance mobility options and reduce accident rates,” Park said. “We are developing the technologies that are already being applied in cars.”