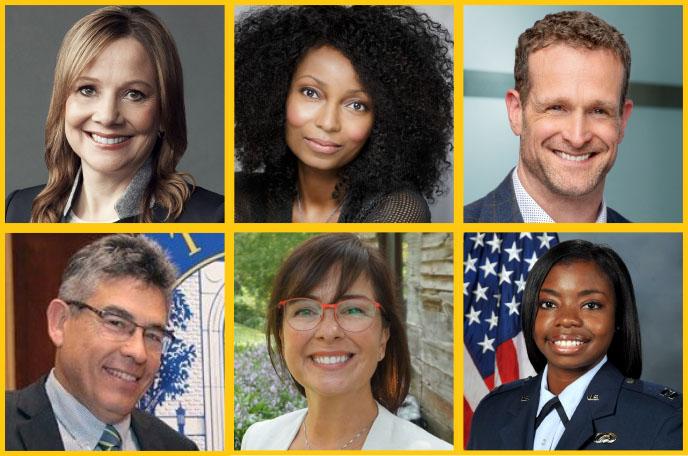 “The 2020 alumni awardees are truly remarkable individuals. Their career accomplishments and dedication to their communities remind each of us what it’s like to be Kettering built.”

FLINT, Mich. – For the first time ever, Kettering University will honor its high-level donors and decorated alumni who are innovators and leaders in global business and industries such as General Motors, Walt Disney Company and more with a virtual event, An Evening of Distinction & Determination at 7 p.m. EST on Thursday, Oct. 22.

“The 2020 alumni awardees are truly remarkable individuals. Their career accomplishments and dedication to their communities remind each of us what it’s like to be Kettering built,” said Susan Davies, Vice President of University Advancement and External Relations. “We also appreciate the opportunity to celebrate all of those who demonstrate their belief in a Kettering education through their philanthropic support. It will be an inspiring evening as the Kettering Community from around the world comes together virtually on Oct. 22.”

The event will be a hybrid of a live virtual event from the Building 22 in Detroit and recorded interviews with the awardees in an effort to keep everyone safe by maintaining safe distancing and limiting the number of in-person attendees.

The following alumni will be recognized:

Mary Barra ’85: As the Chairman and Chief Executive Officer of General Motors, Barra is the first female Chairman and CEO of a major global automaker. She started her career with General Motors in 1980 as a GMI (Kettering University) Co-op student at the Pontiac Motor Division and moved up the ranks to hold multiple senior-level positions before moving to her current role. During 2020, Barra shifted the manufacturing of the organization to focus on making ventilators during the COVID-19 crisis.

The World Association for Cooperative Education elected her to its Co-op Hall of Fame in 2011, and the Kettering/GMI Alumni Association’s Board of Directors awarded her its 2010 Management Achievement Award. She graduated with a Bachelor’s of Science degree in Electrical Engineering from Kettering University, followed by a Master’s of Business Administration from the Stanford Graduate School of Business in 1990.

Latondra Newton ’91: Since joining Walt Disney Company in 2017, Newton has been the Senior Vice President, Chief Diversity Officer. Prior to her tenure at Disney, she served as Group Vice President, Social Innovation and Chief Diversity Officer at Toyota Motor North America, Inc. and Chief Program Officer of the Toyota Mobility Foundation of Toyota Motor Corporation in Japan. Her passion for diversity and inclusion has earned the Top Executive in Corporate Diversity award in 2018 and 2019 from Black Enterprise, as well as the Linkage’s Women in Leadership Institute’s 2014 Passionate Champion Award. Still, Newton has remained active with Kettering University, as she served as the commencement speaker in 2018 and spoke with multicultural students in the Academically Interested Minds (AIM) program in 2019. She earned a bachelor’s degree in Management Systems from Kettering University in 1991 before going on to complete an executive development program at the University of Pennsylvania in 2005.

Andrew Currier ’93: Currier is the Co-founder and Chief Executive Officer of PCK Intellectual Property, an intellectual property boutique firm, including strategy, invention mining, branding, portfolio management, commercialization and trademark preparation. He works with a variety of clients from start-ups to large enterprises. Currier also is accomplished in law and academia, as he practiced for several years with three of Canada’s national firms and worked as an adjunct professor in patent law at Western University in London, Ont. Currier is the co-author of Canadian Patent Law, the first text on Canadian patent law by practitioners in more than 30 years. He earned a Bachelor’s of Science degree in Electrical Engineering at Kettering University in 1993. He also earned a Bachelor of Law from the University of Western Ontario.

Dr. Marie Johnson ’90: Johnson has worked for the last 20 years in cardiovascular, orthopedic and diagnostic medical device settings. Johnson completed three post-doctoral fellowships, each at 3M Company, Politecnico in Turin, Italy, and Stanford University. She has multiple patents (including some pending) in the areas of cardiology, orthopedics, pulmonology, obstetrics and stroke. In addition, she serves on the board of TYLT Labs and several non-profit and social enterprises in the Twin Cities, and is an adjunct professor in the Biomedical Engineering Department of the University of Minnesota. Johnson earned a Bachelor’s of Science degree in Medical Engineering from Kettering University and Master’s of Science and Doctorate degrees in Biomedical Engineering from the University of Minnesota.

Clark Bailo ’81: Bailo, owner of CDM Seeds LLC, started his career at Hydra-matic, which became GM Powertrain. After taking on various manufacturing roles in Ypsilanti and Warren, Bailo was the lead on a math-based design team for lost foam casing and tooling design. The group won the 1997 President’s Honors Award for its work. Fortune Magazine named him and another GM colleague as a Hero of Manufacturing for his work in open architecture controls design in 1998. He also was recognized with various awards as he worked joint ventures with Fiat, Isuzu and Shanghai GM before his retirement in 2008. Bailo has remained active with Kettering University, serving in various capacities on the Kettering/GMI Alumni Board. In 2014, he and his wife, Carla ’83, hosted the Alumni Awards Banquet at Oak Pointe in Brighton, Mich. He also is a member of Kettering’s Boldly Forward Campaign Committee. Bailo earned a Bachelor’s of Science degree in Mechanical Engineering and Electrical Engineering in 1981 from Kettering University. He went on to obtain a Master’s of Science degree in Mechanical Engineering from the University of Michigan in 1984.

Maj. Gervé Tillman ’10, ’13: Tillman is the Deputy Program Manager for the Advanced Synthetic Aperture Radar System in the Intelligence, Surveillance, Reconnaissance and Special Operations Forces Directorate at the Air Force Life Cycle Management Center of the Wright-Patterson Air Force Base in Ohio.  Her acquisitions career began as the Deputy Enterprise Engineer for the Air Force Distributed Common Ground System. There, Tillman managed a $20 million rapid technology insertion portfolio. She also worked as an Assistant Professor of Aerospace Studies and Recruiting Flight Commander at the Illinois Institute of Technology in Chicago. During her Afghanistan deployment, Tillman was the officer in charge and was responsible for the planning, managing and execution of organizational priorities for a Three-Star Army Command. She earned a Bachelor’s degree in Electrical Engineering in 2010 and a Master’s degree in Engineering Management in 2013, both from Kettering University.