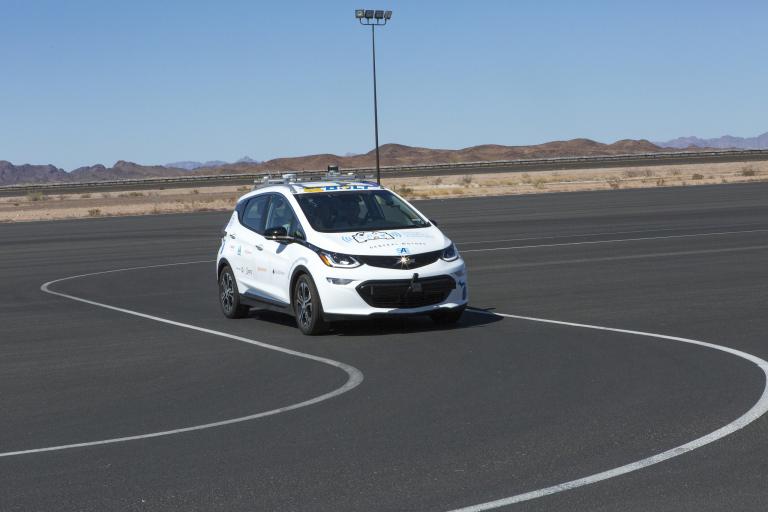 The Kettering University SAE AutoDrive team finished in fourth place overall and received five awards at the conclusion of the inaugural competition on May 5 in Yuma, Arizona. 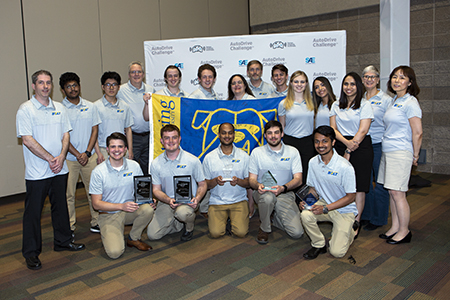 The AutoDrive Challenge is a design engineering collegiate project partnered between and administered by SAE and General Motors. It focuses on reaching SAE Level 4 of autonomy using a Chevrolet Bolt EV vehicle donated by GM. Kettering is one of eight universities worldwide selected to participate.

Throughout the three-year competition, students will focus on autonomous technologies and allow for modification and testing. They will work with real-world applications of sensing technologies, computing platforms, software design implementation and advanced computation methods such as computer vision, pattern recognition, machine learning, artificial intelligence, sensor fusion and autonomous vehicle controls.

Kettering’s team – the Bulldog Bolt – received the following awards during the first competition:

“We are so proud of the more than 60 students who contributed to the Bulldog Bolt team in preparation for this competition, and the many faculty, staff and mentors who supported them,” said Dr. Robert K. McMahan, Kettering University President. “The students on our team represent academic departments across the University, and are a great example of the multidisciplinary nature of autonomous vehicle research and development. The future of mobility and transportation will truly be Kettering Built.”

“I’m incredibly proud of all of our team members – not just the ones who went to Arizona, but everyone who’s been involved over the past year,” said Dr. Diane Peters, Mechanical Engineering faculty member and faculty advisor to the AutoDrive team. “They have some great accomplishments, learned a lot, and are really enthusiastic about building on the first year’s work as we go into the next phase of the competition.”

In this year’s competition, teams focused on concept selection by becoming familiar with sensing and computing software. They were tasked with completion of a written concept design paper and simple dynamic tasks for on-site evaluation. These missions included straight roadway driving, a lateral challenge involving curved lanes, and object avoidance/detection. Students gave presentations about the surrounding social impacts of autonomous vehicles and the design concepts used in their vehicles. They then put their car to the test and had their vehicles perform various, basic driving maneuvers on closed test tracks. 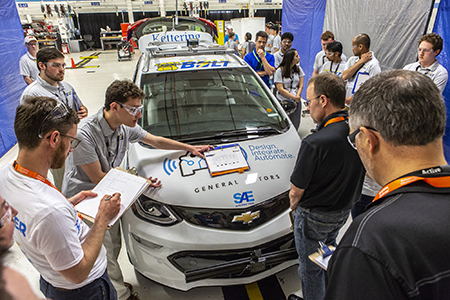 “The team has been working very hard since day one,” said Lindsey Malson ‘22. “We were all super enthusiastic about the competition. I would say our best accomplishment would be the outstanding performance in our reports and presentations. All the teams worked very hard to portray our ideas and convince the judges that our design was the best. Also another big accomplishment was getting second place in the lateral challenge - this was the challenge for going around the curves. Our car used a neural network in order to follow the lines and we completed the second part of the challenge without having any of our wheels outside the lines.

Next year’s competition will challenge teams to refine their concept selections into solid system developments. They will have more challenging testing events including dynamic object detection and multiple lane changing.”

“I think we have a really good starting point for next year,” said Alex Rath ’18. “There were a few small things that if we had more testing time, or time in general, we could've gotten working which could have led us to placing in the top three for this years competition. We were one of the few schools that did not have a large Autonomous Vehicle development project before AutoDrive, so it was pretty cool to see us being competitive with all of the other schools.”

The final competition in year three will culminate with final validation of design and concept refinement. Teams will navigate complex objectives of testing, including higher speeds, turnabouts and moving object detection.

The overall standings for this year’s competition were: