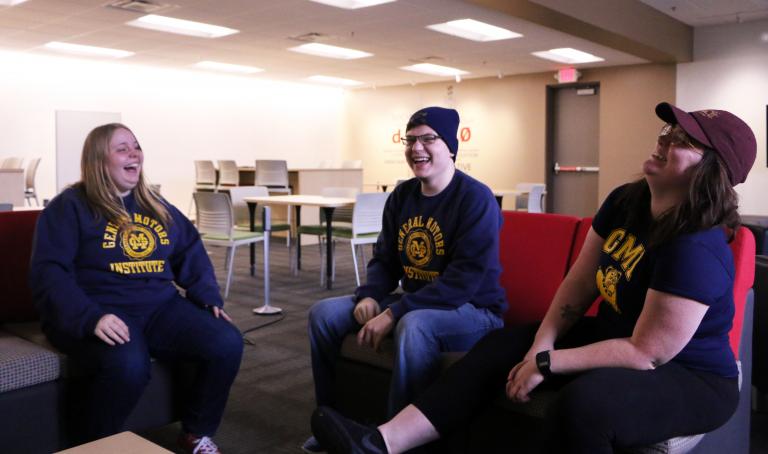 The idea for the shirts came from University President Robert K. McMahan in December 2017, said Katie Jones, Kettering Auxiliary Services Assistant. It was something Jones had wanted to do for a long time.

Jones started with a smaller order to see how it would go, but she didn’t expect the gear to be as popular as it is. Many of the students who are going here now have family members who attended Kettering. That’s one of the biggest reasons they are purchasing the retro gear, she said.

“I have seen staff, students, alumni, and people in the community with it on,” she said. “People who have lived here in Flint are proud of the city, and GMI was a huge part of the history of Flint. They like to honor that.”

She is working with a vendor to create more gear with designs from various eras of the institution.

Fusner saw the gear on a visit to Kettering and took one home with him. Soon after, he purchased another. People stop him at the grocery store to ask if he’d attended GMI. He’s purchased two more T-shirts—one for a ’76 alumnus he met through the Michigan Clays Association and one for a new Kettering student whose mother he met at a restaurant in Wixom.

“It’s a powerful conversational catalyst. They get people talking,” he said. “It’s amazing how those T-shirts tied a lot of my life together in a few short months.”

Kevin Connor ’17 purchased a GMI sweatshirt when he saw a friend wearing one during a visit to campus. One day, he wore the sweatshirt to work, and several Kettering alumni asked him where he bought it. He hadn’t known so many people from his group graduated from GMI.

Connor started taking orders, and someone sent an email to 273 people at Ford. In the end, he placed an order with Jones for 89 GMI sweatshirts. Half of them were Ford employees.

“It snowballed really fast. I thought I’d order 15,” he said. “Kettering’s history is GMI, and it’s cool to wear a piece of it.”

A favorite item among students is the crewneck sweatshirt, which is soft and comfortable, said Alexandra Broom ‘21, a Mechanical Engineering major. She loves the gear because of the heritage within the community and the way it connects the past with the future. When she wears the sweatshirt on tours, people go to the C-Store and buy the gear afterward.

Parker Authier ’22, a Electrical Engineering and Computer Engineering major, said the GMI gear brings more recognition outside of the school. Alumni see his shirt and tell him stories about when they were at the University, he said.

“It’s a smaller private school, but it’s had an impact on so many things. This gear celebrates that,” he said.

Abigail Spiaggi ’20, a Computer Science major, said a Kettering alumnus in her sorority, Alpha Sigma Alpha, sent a box of T-shirts and gear to the sorority, including some with the GMI Bulldog. That prompted her to buy the GMI sweatshirt.

“I like the design. It has an old school feel,” she said. “Aesthetics-wise, I like it. The 90s are coming back.”