Devin Wojcik ’22 wants to work on performance vehicles. He has several years of experience as an open-wheel race car driver to bring to the career.

The Mechanical Engineering major started go-kart racing at age 11 and competed up to the national level. At 14, he started racing cars at the Atlanta-based Skip Barber Racing School, the same school that taught drivers such as Michael Andretti, Danica Patrick and Indy 500 winner Alexander Rossi. 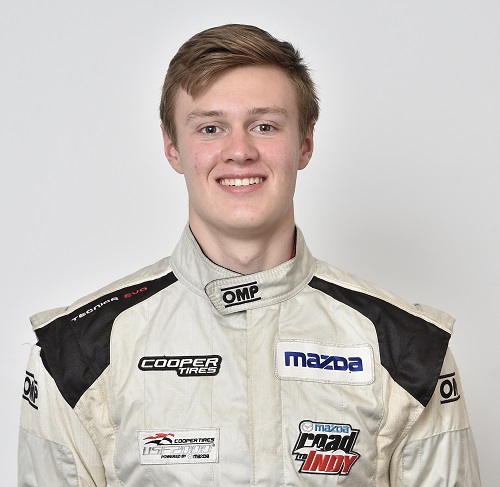 After completing the Racing School program, Wojcik was recruited by professional racing teams. In summer 2016, Wojcik was invited to a one-off race with the ArmsUp Motorsports team to compete in the Cooper Tires USF2000 Championship Powered by Mazda, a development series for the Verizon IndyCar series. He joined the team in 2017 and competed in a full season of USF2000, finishing eighth in the league. At the end of the season, Wojcik was awarded the Tilton Hard Charger Award, an award that goes to the driver who makes the most passes, gains or positions during the racing season.

“I saw a lot of action, which was an incredible amount of fun. It was a good learning experience. Racing at 150 miles per hour bumper to bumper is like a chess game while flying a plane,” he said. “It amplifies all of your senses, which helps you do something that you can’t normally do on your own.”

Although he remains passionate about racing and would like to eventually get back to the sport, Wojcik isn’t racing in 2018 in order to focus on his education at Kettering.

“Each thing needs 100 percent of your attention,” he said. “There’s no point in putting money into racing or school if I’m not giving 100 percent.”

Kettering University was the only school Wojcik applied to. Before he learned about it, he didn’t know schools like it existed. The co-op was a major draw, he said, because it offers a better way for him to learn.

“I don’t think I learn very well sitting in the classroom without applying what I learn,” he said.

After earning his bachelor’s degree, Wojcik plans to earn his MBA, start his career as an engineer and work up to join the administration of an automotive company or start his own business that focuses on performance vehicles.

“There’s always room to make something better when it comes to high performance vehicles, and I’m excited about the opportunities that I will have because of my experience here at Kettering,” he said.