“My best advice to you is to dream big. Don’t give up and build a good team. Don’t let anyone set your limitations.”

Mike Riggs ‘76 believes in dreaming big and not letting expectations get in the way of reaching those dreams. He also believes in giving back in big ways.

During a Student Alumni Council presentation on Aug.30, 2017, Riggs surprised the students in attendance by spontaneously giving each one of them a $1,000 scholarship. The total $131,000 donation went directly to the students.

This isn’t the first time of Riggs’ generous donations to Kettering students. He did the same thing during a presentation in 2014.

“The last thing I thought I would do is own a truck hauling company. Don’t limit yourself to the avenues you think are out there,” said Riggs, CEO and President of Jack Cooper Holdings Corp. “I don’t ever want to hear how poor you are. You can do anything you want.”

Jack Cooper Holdings Corp. is one of the largest car haul companies in North America. The company has grown from 120 employees in 2008 to more than 3,500 today spread across 55 locations all over the world today.

But that growth didn’t come without problems and hardships, Riggs told the students. The company had a three year period whey they had to reduce a substantial amount of debt to survive.

“What drove that type of persistence is the foundation I formed at Kettering,” Riggs said. “Anticipate the problems. Expect it’s going to be a fist fight. Don’t take what you do for granted. Hard work and dedication are all values I got directly from Kettering.” 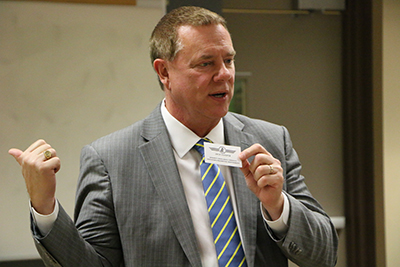 Jack Cooper has twice won a "Global Supplier of the Year" award from General Motors, competing against every supplier in GM's worldwide supplier base of almost 25,000. It has also won the Toyota Presidents Award twice. In 2014 Jack Cooper Holdings won the coveted top honor "World Excellence Award" from Ford Motor Company.

In 2013 Riggs won the Ernst & Young "Entrepreneur of the Year Award" for the Midwest Region, and he also won the "Global Outstanding Achievement Award" in London from Automotive Supply Chain Magazine.

Riggs graduated from Kettering with an Industrial Administration degree and completed his master’s in business administration at Harvard in 1979. Riggs credits his time at Kettering for his preparedness at Harvard and is now creating opportunities for future students to receive the same rigorous and transformational educational experience.

Riggs’ daughter, Sarah Amico, Chairman of the Board at Jack Cooper Holdings Corp and the Head of Mergers and Acquisitions, also spoke to the crowded room on the importance of their education and five keys of success.

She emphasized a long-term vision, an adaptable strategy, patient persistence, building a good team and steadfast values. Amico also encouraged the students to learn from their mistakes and make them a better person.

Riggs admitted that he has experienced failure a few times before owning Jack Cooper but that only further pushed him towards his future goals.

“It’s important to get to know the business first. But I decided I didn’t want to work for anybody,” Riggs said. “In 2008 I decided to build the generations business. My best advice to you is to dream big. Don’t give up and build a good team. Don’t let anyone set your limitations.”