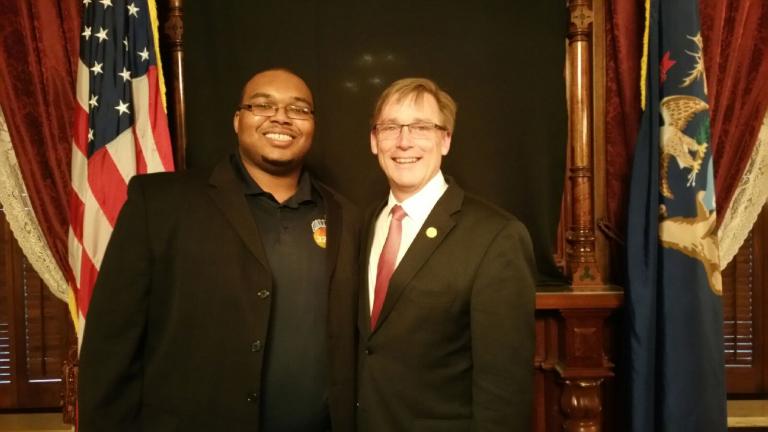 “I want to give a shout out to Kettering University that (build) a first of a kind community center for FIRST Robotics teams. They&#039;ve been a true leader.”

Michigan Gov. Rick Snyder gave special recognition to Kettering University, President Dr. Robert K. McMahan and student Harrison Ford for their support of FIRST Robotics during the 2015 State of the State address on January 20, 2015, in Lansing.

Snyder noted in his speech that Michigan now has more FIRST Robotics teams than any state in the country.

"If you look at kids who do FIRST robotics, the likelihood they will go on to engineering or skilled trades goes up dramatically," Snyder said. "We were no. 2 in the country several years ago. Over the last few years we added teams. This last year we added 77 teams, more than the other 49 states combined. We are up to 349 teams, 110 more than California and we are hoping to be a leader in that."

Snyder specifically noted Kettering's role in supporting the growth of FIRST in Michigan.

"I want to give a shout out to Kettering University that (build) a first of a kind community center for FIRST Robotics teams," he said. "They've been a true leader."

McMahan and Ford, seated in the Michigan House of Representatives Chamber, were shown on the broadcast as Snyder touted Kettering's leadership in FIRST and STEM education.

“It was an honor to represent Kettering University at the State of the State address,” McMahan said. “Our FIRST Robotics Community Center is already creating new opportunities for students to not only gain exposure to FIRST, but also gain an immersive experience as a valued member of a leading STEM and business university’s campus community. While using state-of-the-art equipment and technology, pre-college students are also receiving valuable access to our students, faculty and staff as mentors and seeing firsthand the limitless potential STEM careers offer. We are grateful that Gov. Snyder shares our enthusiasm for FIRST Robotics and the transformational power it offers to its participants.”

Snyder attended the grand opening of Kettering’s FIRST Robotics Community Center – the first facility of its kind on any college campus in the country – in September and was impressed with the facility's potential to support the growth of FIRST Robotics.

“To put it simply, this is awesome,” Snyder said at the grand opening. “This is really the only year-round FIRST arena that we know of in the country. It’s great to see Kettering taking the lead.”

Ford, who participated in FIRST in high school and is currently a mentor to the Flint F.I.R.E. team that is housed in the center, gave a speech during the grand opening that moved Gov. Snyder and his staff.

“I guess you could say that I was stunned that I would be chosen to be with the Governor on his biggest day of the year,” Ford said. “That’s a high honor."

As part of his studies at Kettering, Ford is employed as a co-op student at Flexible Products in Auburn Hills, Michigan. He is a graduate of Carman-Ainsworth High School in Flint, Michigan. Ford has stated that the main goal of Flint F.I.R.E. mentors is to expose kids in the city of Flint to STEM concepts, inspire them to pursue a college education and share with them the possibilities STEM careers offer.

“I really want to help kids get to college,” Ford said. “FIRST promotes competition but truly, I don’t care about competition, I care about getting these kids to college and helping them get scholarships for college That’s one of the reasons I changed teams as mentor because I wanted to help inner city kids in Flint go to college.”

"He was on a FIRST robotics team and it meant so much to him, he's a now a mentor for another FIRST Robotics team in Flint  - Flint F.I.R.E.," Snyder said. "This is the case of someone having success and giving back."