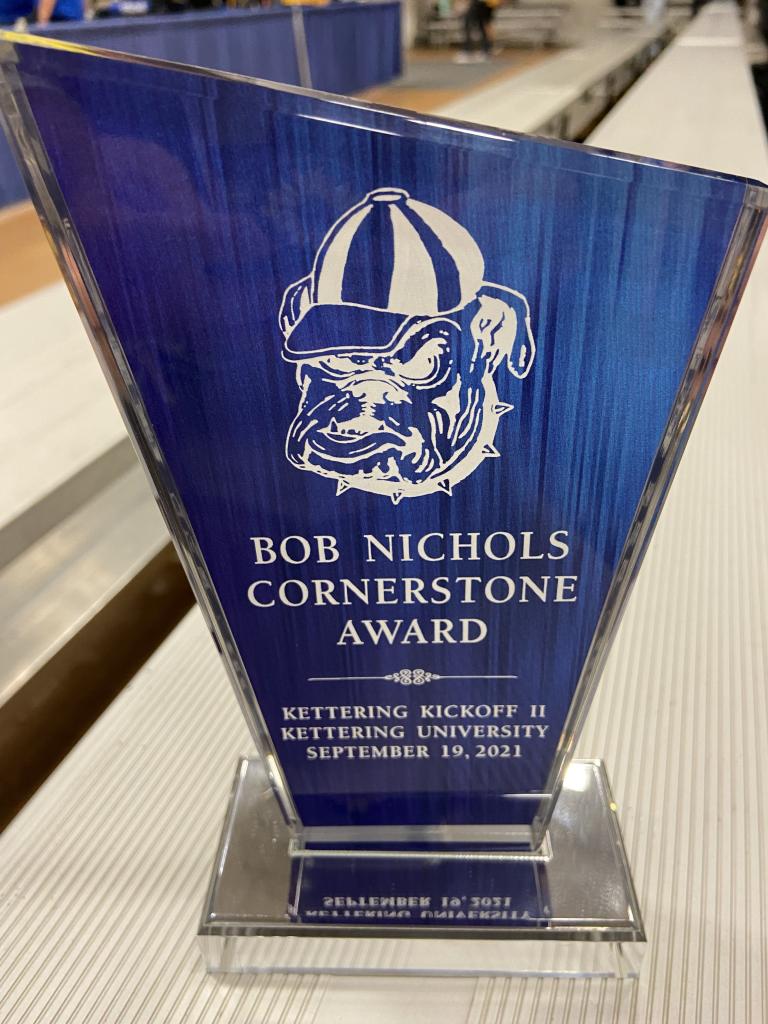 “Everything robotics that you see at Kettering University is because of him. He is truly the first stone that was laid, orienting all of us in the direction we should go.”

Every year at the FIRST Robotics Kettering Kickoff, a team of students, mentors and parents earns the peer-nominated Cornerstone Award for helping build the FIRST community and serving as a role model for other teams.

This year, the Kettering Kickoff Planning Committee changed the name of the award to the Bob Nichols Cornerstone Award and presented it to its namesake, Bob Nichols, Kettering’s FIRST Robotics Community Center Director, during the two-day event Sept. 18-19.

“It’s very humbling,” Nichols said. “You don’t know how much of an impact you have on people’s lives, and sometimes, it’s nice to hear it.”

The committee recognized the exceptional person isn’t always a student, mentor or coach from a team but can still make a difference within the FIRST community as Nichols has.

“For the last 23 years, he has been an advocate for STEM education, inspiring more people than we could ever count,” said event host, Joel Hurd (’19, ME), as he presented the award. “Everything robotics that you see at Kettering University is because of him. He is truly the first stone that was laid, orienting all of us in the direction we should go.”

Nichols initially learned about FIRST Robotics in 1997 when he was Vice President of Enrollment and someone from Powers Catholic High School approached him about the University sponsoring a team. Around the same time, then-University President James E.A. John had told Nichols to look into it after an alumnus brought it up to him. A year later, the University sponsored the Powers team, and the program grew from there.

“I wasn’t sure if I had made the right choice until I went to the first competition and walked into that arena and saw what was going on,” Nichols said. “It was the competition that confirmed this is a good thing not only for recruiting, but for community service.”

Kettering offered its first two scholarships to FIRST Robotics students and hosted its first kickoff event in 1999. Last year, the University offered 72 scholarships, and this year, 72 teams competed during the event.