The favor of family history 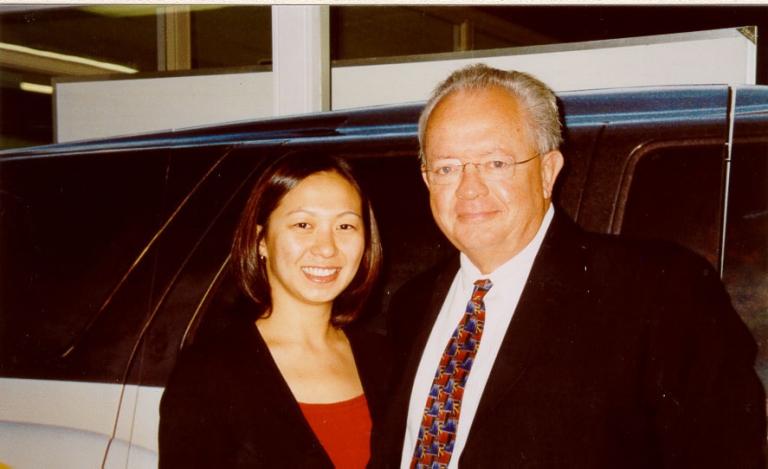 "We all imagine life will extend its favor in the natural course of events, that we will come at last to live in a place that is bright and simple and clean. This is our penitential desire. It is a reasonable desire, an admirable ambition, and not to be faulted. It is how time rides. It is the light by which we live and die."

From "Crossing Over: The Vietnam Stories,"
by Richard Currey

They stood beneath the stars on the shore at the jungle edge in 1980, their 11-month-old baby girl cradled delicately in the mother's arms. To the north, five, maybe 10 miles away, they envisioned the glow of a small firefight between an American patrol and a guerilla unit that may have taken place years before somewhere along the beach, and hear the faint pop of M-16s and AK-47s in the distance. For a brief moment, they turned their weary gazes from the direction of where the battle may have erupted and peered out over the silent waters of the ocean, praying that their escape would meet with success.

Their dream that warm night was a modest one. They hoped to find favor in the light cast by a future they could no longer envision in their homeland of Vietnam. No matter how difficult and painful it was, they understood that to give their baby and her future siblings a chance at a peaceful, happy life and a place in the world that Currey describes as "bright and simple and clean," they had to leave everything they knew and love-family, friends, culture and homeland.

It was a defining moment in one family's history. Today, its significance is not lost on their oldest daughter, Kettering graduate Cindy Nguyen.

Her parents' escape that night in 1980 was not easy by any means. They sold all of their possessions for the chance to make a better life in a country they knew little about. That evening, as the fishing boat they boarded slowly drifted away from the dock and their former life, a communist military patrol attacked. Yet they managed to break free, as well as other members of Nguyen's family in the following months, many of whom settled in Canada.

"Much of my motivation in life comes from my parents' story," Nguyen explained. "I think of my parents in the jungle with me at 11-months, the night they stepped onto the fishing boat, bidding farewell to their home, unsure of what was to come, unsure of whether or not they would live to old age or die at sea & I live to fulfill the dream they had that night."

In Windsor, Canada, where Nguyen and her family settled, her parents had to start over. They had no money, even though her grandfather, Thanh Tan Nguyen, owned a very successful contracting firm in southern Vietnam, which he began with his wife as a poor working couple many years before. However, when the Communist Party came to power in 1975, her grandfather was forced to relinquish ownership of his company to the state and work for the firm. He died a few years later.

But Nguyen's family would never forget the motivation and desire of her grandparents in building a successful business and loving family in a country riddled by political and social unrest. This was one aspect of their life the Communist Party could never take away.

"My parents have slowly worked their way up," Nguyen said. "Today we have a beautiful home in a very respectable neighborhood of Windsor. My parents are honorable members of the Vietnamese community. My siblings and I (younger sister Linh, who studies Mechanical Engineering at the University of Waterloo, and brother Adam, who is an Electrical Engineering major at the University of Windsor) have found that happy medium between two very different cultures. We are living the dream. If my grandfather and parents were able to make their dreams come true starting from nothing, then I have no excuse but to make my dreams come true, since they sacrificed so much for our future."

In many ways, she has already made huge steps in bringing light to the dreams once imagined by her parents and grandparents.

According to several faculty at Kettering, her thesis, titled "Technology Study, Review of Patent Protection Strategies and Design of Positive Airway Pressure Device," is "one of the best researched and written in recent years," said Dr. James Gover, professor of Electrical and Computer Engineering, and her thesis adviser.

Specifically, Nguyen's thesis idea required her to conduct a study to learn about technology that deals with the treatment of sleep apnea and other related illnesses. She then researched how this technology was protected in terms of patents and what was considered to be public domain. After her review of hundreds of patents and publications on positive airway pressure (PAP), she developed a control system for a PAP device that was patentable and does not infringe on the prior art.

More importantly, her idea could bring relief to people on several fronts without incurring exorbitant cost.

With most existing PAP devices, Nguyen explained that patients must spend two nights in a sleep clinic to receive a diagnosis and prescribed a treatment pressure, which is both costly and time consuming. With her proposed system design, patients simply use the device without having to go to a physician or sleep clinic. The system generates ideal breathing patterns for the patient as they sleep in their own bed and establishes compensatory treatment pressures when occurrences of sleep apnea and other breathing difficulties (such as snoring) take place. The more her device is used, the more accurate the system becomes with analysis and treatment of occlusions in the patient's airway passage.

Gover noted that her system could eliminate the physician diagnoses and prescription process required by existing devices, which in turn may reduce costs to insurance companies and individuals.

"With health care costs and insurance premiums spiraling out of control each year, Cindy's system will create a cost effective and important new way to treat sleep apnea," Gover said. "Insurance companies will have little justification to increase costs to combat this disorder if her system earns acceptance, which I'm confident it will."

And so Nguyen's dream-and indeed the dream her parents had some 23 years ago-is one that could potentially help thousands of individuals throughout the world. The dreams of her parents began as a modest hope for the future and took shape during their daughter's attendance at Kettering. Now it is a reality that could literally help thousands of people throughout the world, a noble endeavor Nguyen's grandparents would truly find inspiring.

"Kettering's unique academic and cooperative program really helped bring this idea to fruition," she said. "The school was always able and willing to cater to my specific educational and career goals. Even if I had to put up a fight, there was always someone there to help me do what I felt I needed to do to learn what I wanted to learn and get the experiences I desired."