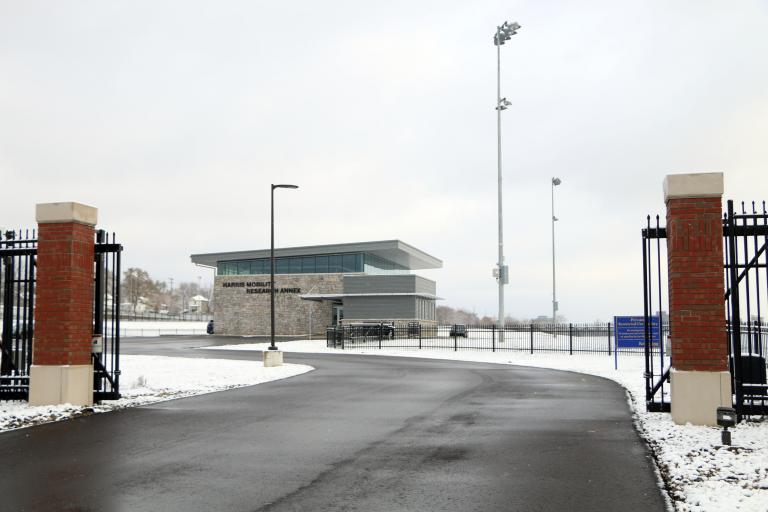 In accordance with that belief, he donated $1 million for the Harris Family Mobility Research Annex. The facility, which has meeting spaces, a garage, and viewing platform, was completed this fall at Kettering University’s GM Mobility Research Center.

“I’ve just been extremely impressed with what’s gone on with the expansion of programs,” Harris said. “The scholastic side has always been on the cutting edge, but I think it’s more so now than it has ever been, which I think is very critical.”
A member of the Board of Trustees from 1983 to 1992, Harris is a Flint native and former General Motors engineer and sales representative. In 1995, Kettering bestowed Harris with an honorary Doctorate of Humane Letters.

The Harris family has a long history in Flint. Harris’s father graduated from high school in 1907, and worked for Buick after serving in World War I. Harris left the area at age 35, but retained ties to the area through his family.

Harris graduated from Flint Central High School and the University of Michigan. He served in the U.S. Navy as an ensign from 1943 to 1946. Immediately after earning his degree in 1945, he worked as an engineer at GM-Buick Motor Company. In 1953, he took a new position as a sales representative for GM accounts at Bohn Aluminum & Brass in Detroit. He worked for two years as plant manager at Bohn Aluminum and Brass in South Haven before becoming the company’s Vice President of Sales.

Harris joined the Kettering Board of Trustees shortly after General Motors Institute separated from GM in 1982 and served for nine years. That’s when Harris started giving back to the institution and its students. In 1983, the Harrises created the Harris Family Endowed Scholarship. His brother and sister also contributed to the fund.

“We all had a good background in Flint and just wanted to support the school,” he said.

In 2017, the Harrises donated additional funds to the family scholarship. Eleven Kettering students received scholarships from the fund in 2017-2018.

His wife, Jean Harris, was a driving force behind the couple’s additional donations to the scholarship fund, Ed Harris said. A retired elementary school principal, Jean Harris was impressed when they visited Kettering in 2016 and met recipients of the Harris Family Scholarship at the Donors and Scholars Luncheon.

“This scholarship is going to make a significant difference in my life over the course of an entire year,” said Harschal Patel ‘18, a Harris Family Scholarship recipient. “I can't thank you enough for providing me with this opportunity.”

In addition to the academics at Kettering, Ed Harris also loves to see the work the University has done to improve Flint, something that’s incredibly personal to him. He recalls football games in Atwood Stadium and thriving neighborhoods near the University with the well-paying jobs that GM and Buick brought to the city.

Now, Kettering and the other higher education institutions in Flint are critical to the future of the city, he said. Harris believes supporting students and faculty at Kettering has a major impact on many of his passions.

“If you’re going to do something, the more impact it has, the better it is,” Harris said. “Kettering is a perfect world for my wife and I to give support.”