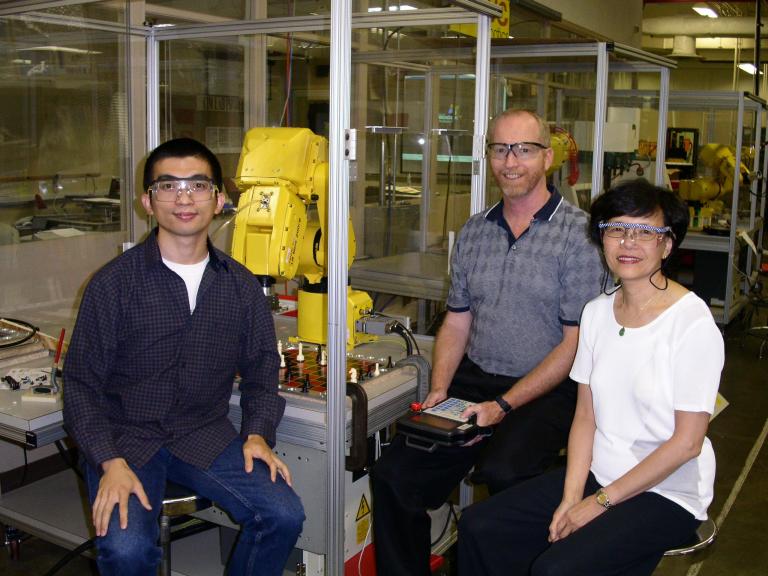 The Rodes Professorship honors Kettering faculty for breadth and depth of knowledge, commitment to diligence in terms of academic research, and leadership in developing and applying an area of knowledge, among other attributes. The grant provides each professor with an opportunity for continued professional development and a chance to disseminate the results of their research to Kettering students, alumni, University clubs, industrial groups and other colleges and universities. According to Debra Schnettler, director of Alumni Events, the Kettering/GMI Alumni Association sponsors the Rodes Professorship as a vehicle for alumni to support and encourage excellence in scholarship among Kettering faculty.

El-Sayed and King won this year's award based on their collaboration in the development of their project titled "Multi-Objective Optimization for Automatic Fixturing Configuration Design." This project brings together El-Sayed's work in multi-objective nonlinear goal programming with the current automatic fixturing work of Dr. King. The endeavor will also combine their areas of research and verify their results through experiments as a means of creating a new method for automatic fixturing configuration design. This will then allow researchers to consider the constraints of the fixturing model as additional objective functions that can assume differing priorities. In addition, this is the first year in which faculty members from different departments worked together to win the Rodes.

El-Sayed graduated from Kettering/GMI in 1986 and went on to earn her master's of science and Ph.D. degrees from the

King and El-Sayed hope to leverage the $5,000 grant with funds from their individual faculty development accounts, which will allow them to purchase additional fixturing design equipment, computer hardware and software, support several undergraduate research assistantships, and disseminate their results. Based on their project proposal, both professors expect their work to benefit the MFGG-490 Robotics course by helping students focus on automated fixturing design. More importantly, the results of their research could lead to a much swifter design process for fixtures used for different products and verification of fixture design performance.