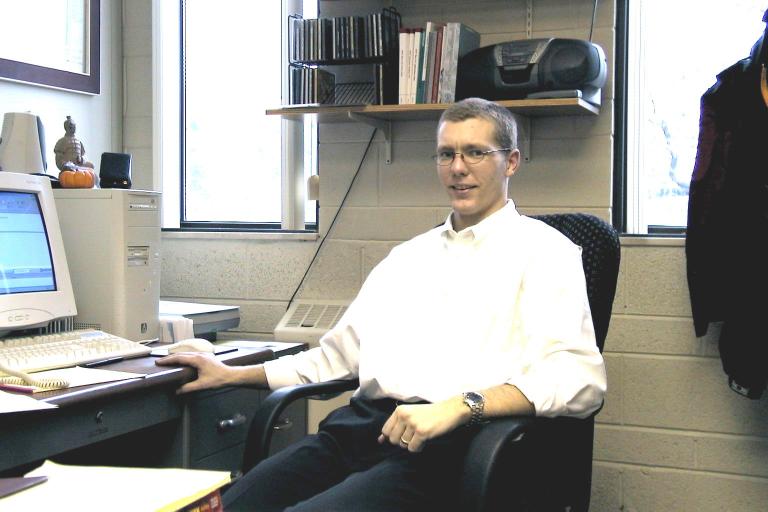 Not the kind one might associate with the game of hockey, where forwards barrel down the sideboards with the puck and the defenseman angles his body while skating backward, then rams his rear into the hip of the offensive player, sending him head over heals as the puck skitters into the corner.

No, Harding isn't worried about taking a hip check while walking the halls at Kettering. For this associate professor of Manufacturing Engineering, a hip check is something he wishes to investigate as it relates to artificial hips, the kind where an individual's pelvic bone structure has deteriorated to the point where a replacement hip is necessary to allow the person to continue a normal life. And now with the receipt of a new piece of equipment, Harding has the potential to examine materials in hip replacement components, which may prolong the life of these mechanisms and increase the quality of life for people with replacements.

It began a little more than a year ago when Mechanical Engineering Associate Professor Pat Atkinson received an offer from Bio Pro Inc. of Port Huron, Mich., to take possession of a 12-Station Hip Simulator manufactured by MTS Inc. valued at $190,000. Atkinson, who overseas Kettering's Crash Test Safety Lab and works on collaborative projects with doctors from McLaren Regional Medical Center in the area of orthopedics and automobile accidents, thought that perhaps Harding's areas of research might be more of a fit for this kind of equipment. For his part, Harding had expressed his interest in developing a lab that might one day help researchers conduct innovative research on orthopedic devices and educate students in biomedical research, which is quickly becoming a growing field.

The facts about hip replacement components and surgical procedures speak for themselves: based on research by the National Institute of Arthritis and Musculoskeletal and Skin Disease (an arm of the National Institute of Health), people typically require hip replacement surgery because the joint wears down due to a number of issues, such as osteoarthritis, rheumatoid arthritis, bone tumors and avascular necrosis (loss of bone caused by inefficient supply of blood). In some cases, severe trauma to the hip area and infrastructure from, say, a devastating hip check during a hockey game, can also cause deterioration over time. Harding explained that in the early 1990s, hip replacement components and materials only lasted seven to 10 years, a fact that didn't bring much comfort to those who underwent surgery.

As baby boomers reach retirement age and the X-Generation begins to feel the faint click of joints growing louder, the timing for Harding's work in this area could not be more perfect. With the 12-Station Hip Simulator, he expects to examine the impact of alternate material combinations on the performance of hip replacement components. This includes studying the articulation, or movement and operation, of the hip components using the simulator to replicate walking motions and other common activities. During tests, researchers manipulate loadings on the hip joint using an intricate computer-controlled hydraulic system.

But to understand the significance of his research, one must take a close look at the joint and how it operates.

The hip joint is located where the upper end of the femur (thigh bone) meets the acetabulum. The femur resembles a long rod with a ball on the end and the acetabulum is similar to a cup-like structure in the pelvis. This ball and socket orientation allows a range of movement, like sitting, standing and walking. During hip replacement surgery, the surgeon removes the diseased bone tissue and cartilage from the hip joint, leaving the healthy areas intact. The surgeon then replaces the head of the femur and acetabulum with the artificial hip components.

Unfortunately, Harding said that in years past when a person underwent a hip replacement, "the wearing process eventually abraded the surface of the acetabular component, which created fragments that got caught in the synovial sack, or protective fluid in the hip. Eventually, the bone into which the hip replacement device is attached begins to dissolve, loosening the entire device from the body. This is basically a failure, which requires additional surgery."

But with the 12-Station Hip Simulator, Harding expects to conduct in-depth research on this and other issues that currently plague hip replacement materials and components. Some of these include testing new material combinations; studying what happens if the femural head is scratched or a piece of bone is loose and gets caught between the femoral and acetabular components; and examining what effects varying levels of activity have on the hip replacement.

This kind of research, Harding said, is uncommon for an undergraduate-focused university. But how does the equipment actually work? Harding said the equipment holds the femoral head and liner of the total hip replacement constant. The coupling is then soaked in liquid to emulate the synovial fluid of the joint. The hip simulator generates a normal walking cycle, which produces a computerized profile for the equipment to run. In general, the joint undergoes five million cycles, which replicates approximately five years of walking using hips. The station then filters the debris from the artificial hip replacement, or that material that fragments away from the mechanism during testing. Harding and students will then use Kettering's environmental scanning electron microscope to characterize the size, shape and size distribution of debris particles, which will provide a better assessment of the damage incurred by the artificial hip replacement components.

"This is a very unique opportunity for Kettering," Harding said. "This sort of thing is undertaken by mostly medical schools, so we really have an opportunity to engage students in something they may have never considered examining. Ultimately, the results from our research could lead to manufacturers developing longer lasting materials by determining why they fail and assisting with new design development. More importantly, the equipment gives us a chance to educate students in biomedical research through innovative projects."

Harding also hopes this research and new equipment will lead to further opportunities to work with Bio Pro Inc. on other projects. Currently, he is assisting them with a project on a new material and recently the company hired a new Kettering co-op student named Josh Refenes, a Mechanical Engineering student from Milwaukee, Wis., thus yielding even more opportunity for the University while helping to one day make life a little easier and more active for those who undergo hip replacement surgery. The McLaren Foundation recently contributed $20,000 to help Kettering renovate a laboratory space at Kettering to house the 12-Station Hip Simulator, which Harding said was aided by Dr. Norman Walter, chief of Orthopedics at McLaren. Future projects Harding hopes to engage in include writing and submitting a proposal to the Aircast Foundation in Pittsburg, Penn., for additional funding of a research project. The foundation recently approved Harding's preliminary proposal and he hopes to hear back on his final proposals by December of this year.

And although he sees the intrinsic value in receiving such a great piece of equipment and in taking a hip check, Harding is quick to recognize Dr. Charles Townley, who created the device and donated this equipment to Kettering through Bio Pro. Townley is the original founder of Bio Pro.

"This equipment is something that many undergraduate programs only dream about," Harding said. "We're very fortunate to receive it and work toward developing a laboratory for this area of study."

Acknowledgements: Grateful acknowledgement is made to the Medical MultiMedia Group (MMG), LLC, for use of graphic images of the human hip with replacement hip components. For more information on MMG, visit the website at www.medicalmultimediagroup.com.