“I was so excited to be chosen to speak,” Scott said. “I feel like my message will resonate. I’m trying to make it relatable to everyone.” 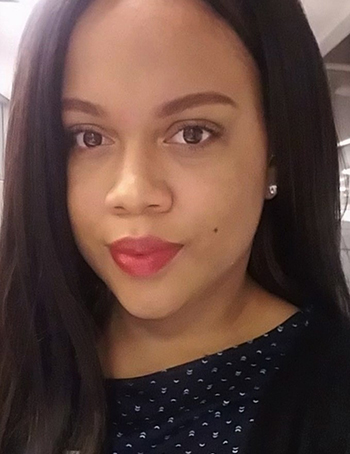 Scott, who is from Houston, Texas, and later moved to Flint where she graduated from International Academy of Flint, is graduating with a Business degree. She had co-op placements with Irvin Automotive and Beaumont Health and hopes to go into supply chain management after graduating.

“I’ve learned a lot about myself at Kettering,” she said. “I know what my strengths and weaknesses are. Kettering pushed me to grow as a person and get out of my comfort zone.”

Scott was involved in many activities at Kettering, including serving as the programs chair for Kettering’s chapter of the National Society of Black Engineers (NSBE) and vice president of the Black Unity Congress (BUC).

Her involvement in student organizations led to her forming some of her favorite memories at Kettering.

“NSBE created a volleyball team for the R-tourney intramural sports at the rec center and we won the R-Tourney championship for Winter 2018,” Scott said. “This was really exciting because I played volleyball in high school and hadn't played in three years.”

Scott also worked in the recreation center for four years, serving as a recreation assistant for three years and facility manager for one year.

“I really enjoyed working in the rec center, being in a fun, social environment,” she said.

Her academic experiences at Kettering were valuable as well. She did a project for her advanced strategy class that allowed her to work as a business development consultant for a property management company. She also received valuable insight from Professor Larry Navarre, who served as her thesis advisor.

“My advisor really worked with me to help me explain a complex problem and make it understandable,” said Scott, who completed her thesis with Beaumont Health. “I had to learn about their entire process and work closely with a team to get it done.”

Scott was drawn to Kettering after her participation in the Academically Interested Minds (AIM) pre-college program.

“I became really familiar with the University and felt at home here,” she said. “I also really saw value in the co-op program and knew I wouldn’t get that experience at another university.”

Kettering’s Commencement Ceremony is at 11 a.m. on June 16 in the Connie and Jim John Recreation Center.