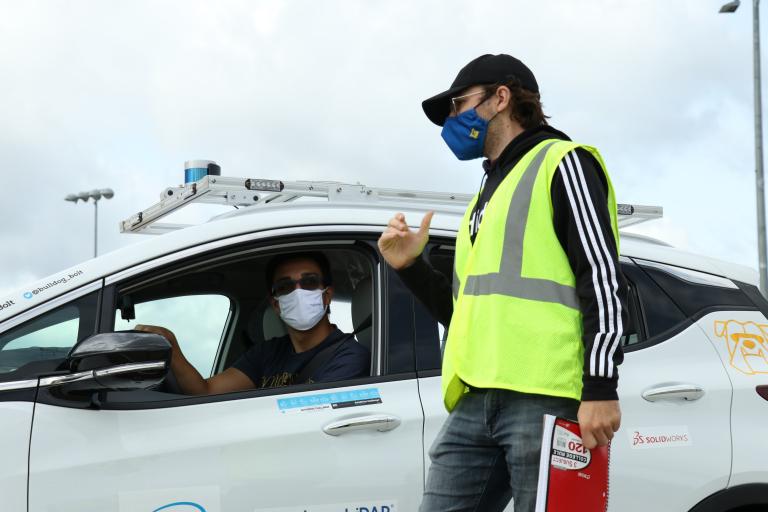 The awards were announced October 1 during a virtual ceremony.

The Bulldog Bolt team earned 92 points out of a possible 100 to win in the vehicle safety assessment category. For this component, students must create documentation by thinking of potential problems and consequences of those problems and how to mitigate them.

“I was very pleased,” said Dr. Diane Peters, one of the team faculty advisors. “They put a lot of work into it and they went through and did multiple iterations.”

They earned 82.5 points out of 100 to place second in the MathWorks Simulation Challenge.  This challenge deals with model-based system engineering, which allows students to do much of their development and testing virtually in computer simulations and autogenerate code based on the results.

Schools’ scores will be reset to zero for the fourth year of the competition, which kicks off Nov. 4 2020.

Graduate student Alex Garrow has been working with the team this year. He’s paid 20 hours a week to work on AutoDrive, but says he puts in close to 40 hours. AutoDrive is a big commitment for students with weekend testing taking up to 10 hours a day. The team tested most weekends this summer, and it paid off.

“The car works better than it did before,” Garrow said.

About 40 students across both sections and grad students participate on the team.

Eight teams have been participating in the Society of Automobile Engineers International and General Motors’ AutoDrive Challenge for the past three years. Teams, which were selected by SAE, are tasked to develop and demonstrate a completely autonomous-driving passenger vehicle.

Each year, the competition builds on the next by adding more challenges. Teams are recognized in various categories, as well as overall. This year, the focus was on various urban environment driving scenarios such as encountering static and dynamic objects, traffic control lights and signs, and lane line scenarios. Students give presentations to a panel of six to 10 judges from different sponsors and areas of expertise.

In addition to the competition challenges, Peters said the team decided early on it would have its own mission of “expanding mobility across all demographics.”

Though this was Garrow’s first year, he understood where the team was coming from.

“Our team has always taken the standpoint that if you’re going to design an autonomous vehicle, there has to be a good reason,” he said, noting the vehicle should expand across all mobilities instead of being an afterthought of the design.

Typically, most computer algorithms have a harder time distinguishing people of color or people in wheelchairs because more testing is done with the program using white, able-bodied people, Garrow said.

“[We want to] consider designs for them from the beginning, not just being able to see those people with computer vision, but using the design for them such as a person in a wheelchair who couldn’t drive before, but now can get in and go to the grocery store,” he said. “… If you’re going to design something and put such a huge effort in it, there’s got to be a lot of reason for it. How can we expand it to benefit everyone and make a more powerful impact?”

Garrow said the team’s biggest challenge this year was adjusting to the changes made because of COVID-19. They had more virtual meetings and missed out on in-person testing time because of group gathering restrictions. When they do meet in person, they practice social distancing and wear masks. They also limit the number of students in the car to one in the front and one in the back and put a shower curtain between them.