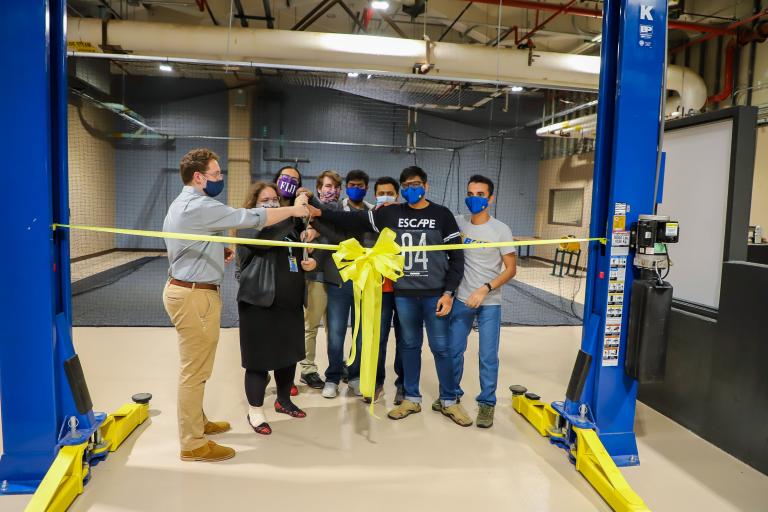 “I see this space as the continued commitment to AutoDrive and providing opportunities to students.”

The Kettering University AutoDrive team, Bulldog Bolt, has an improved space to focus on its next challenge.

“Thank you to Kettering University,” Caleb Burgess (’22, EE) said at the event. “I see this space as the continued commitment to AutoDrive and providing opportunities to students.”

In 2017, the Bulldog Bolt team moved into the space — previously known as the Vehicle Durability and Integration Lab, or “Shaker Lab” — when it began outfitting the Chevy Bolt into an autonomous vehicle as part of the AutoDrive Challenge.

“I remember walking in for the first time,” Burgess said. “It had always been a good space; it was large enough for what we needed to do, but this is definitely a very nice space to grow into.”

The renovation included installing new lights, painting the walls, painting the floor and coating with a nonslip coating and adding a new vehicle lift and adjustable work benches. The “shaker,” the former lab equipment that was used to test vehicles and its components by shaking them, was removed and replaced with a drone net and mat.

“It’s spacious and well-equipped to work on all facets of mobility, not just AutoDrive,” Peters said at the event.

Bulldog Bolt received multiple awards during the four-year AutoDrive Challenge and placed fifth overall. The competition, sponsored by the Society of Automobile Engineers (SAE) International and General Motors, tasked eight teams with developing and demonstrating a completely autonomous-driving passenger vehicle. Each year, the competition built on the next by adding more challenges.

Kettering joined nine other teams, including six returning teams, to compete in the AutoDrive II Challenge, which kicked off in September in Ann Arbor. The team won’t work on a vehicle until the second year of the competition, which is a change from the first challenge. This year, they are charged with outfitting a large metal cart with sensors and collecting data.

“It’s a nice starting point,” said Burgess, who was the lead for mechanical and hardware integration and design concept reporting in the first challenge. “The cart will provide an opportunity to put together an electrical system, and it should be easy to put on the car.”

He said starting with the cart is easier because all sides are flat, which will make mounting the sensors easier.

The new lift also will help in the next competition.

Funding for the renovations came from a donation made by Thomas Nealssohn (‘93, IE), Senior Innovation Manager for SRG Global.