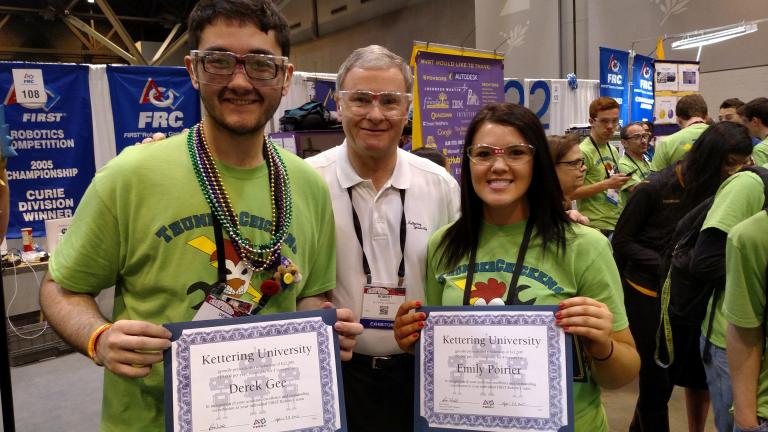 FIRST Robotics taught Emily Poirier of Team 217 (Thunder Chickens) about the importance of “working as a team and thinking on your feet.” It will also help her to pay for college as she is one of 44 high school students who received a FIRST Robotics Scholarship to attend Kettering University in 2015.

Poirier’s robotics team represents the Utica Community Schools in Macomb County. As a junior in high school, Poirier worked in the public relations and marketing department for the team and as senior she was promoted to Vice-President of the Thunder Chickens. She plans on studying Mechanical Engineering with a specialty in Bioengineering at Kettering and will be completing her co-op at Magna Seating in Novi.

Since 1999, Kettering has awarded more than $4 million in scholarships to participants in FIRST. In 2014, Kettering received a nearly $600,000 grant from the National Science Foundation to continue to support academically talented robotics students.

Drew Sedam of Team #2137 (TORC) based out of Oxford, is also a recipient of a FIRST Robotics Scholarship and will attend Kettering already having experiences with computer-aided design (CAD) programs. As a senior, Sedam was the CAD Team Captain and the driver of the robot. Sedan will major in electrical engineering at Kettering and complete his co-op at BorgWarner in Auburn Hills.

“I chose Kettering because I really love the co-op program,” Sedam said. “Being able to get two-and-a-half  years of experience before graduating college is huge.”